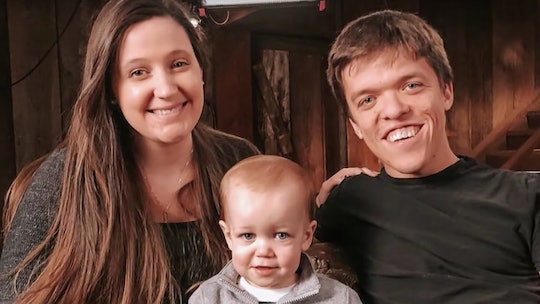 Tori Roloff Opens Up About Her Son Jackson Being "Different"

When Tori and Zach Roloff decided to start a family, they were well aware of the 50/50 odds of having a baby with dwarfism. Zach is a little person, after all. Ultimately, the Little People, Big World stars welcomed a baby boy they named Jackson — who has achondroplasia, the same type of dwarfism as his father. In most ways, the Roloffs' son is just like any other 2-year-old. Recently though, Tori Roloff opened up about her son Jackson being "different" in a candid, inspiring post.

As People reported, Tori and Zach welcomed their first child in May 2017 — meaning their son is now 2 years old. And although most days Jackson is just like any other toddler, Tori opened up via social media about an experience that reminder her he is indeed "different."

Today pointed out that he is different and that’s never going to change. He watched as kids (many younger than him) rode rides at a festival here in town and he wasn’t able to join. Jackson wanted so bad to ride the airplanes that went up and down but the height requirement wouldn’t allow him to (which I totally understand!). It was harder for me than it was for him for sure. It was really the first time I was hit in the face with the fact my child is different.

Aww. My mama's heart feels for Tori in this situation. No one wants to see their child get left out.

The clearly bummed mama went on to put a positive spin on her experience, explaining how proud she is of her husband and his continued positive outlook on life. "In the words of @jeremyroloff : if a bad attitude would fix it- I would have one," she wrote, also giving a shoutout to Disneyland for having no height requirements. Tori then ended the post with an inspiring sentiment about her son.

This kid is meant to bring light to this world this I know for sure.

Zach and Tori first learned their son had achondroplasia when Tori was 34 weeks pregnant, as she shared on Instagram in October 2018. And although she initially felt fearful about the diagnosis, it didn't last long. “I have the best resources at the palm of my hands and I was fortunate to have some background knowledge,” she shared, according to Us Weekly. “I can only imagine the fear of a parent who has no experience with dwarfism.”

Considering Zach and Tori are expecting their second child — a baby girl this time — I would imagine the question of whether this child will have dwarfism has been on their minds.

Can I say that I appreciate how open Tori is about her parenting journey? By sharing her feelings and experiences while raising a child with dwarfism, she's shedding a light on the challenges little people (and their parents) can face. At the same time, Tori and Zach know their son is capable of doing anything he sets his mind to do — just in a different way than a person of average height might.

And for the record, I agree with Tori: Jackson will most certainly "bring light to this world." Because he already has.