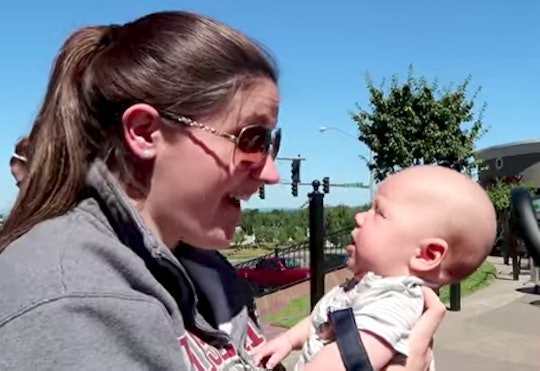 If you've been following every snippet of baby Jackson Roloff's little life, you'll be thrilled to see the latest update. Tori Roloff posted an update about her son on Instagram on Thursday, and it's seriously the cutest thing ever. Jackson is now 5 months old, and his parents have been really great about sharing his milestones with Little People, Big World fans.

The photo Tori posted features baby Jackson — who seems to be lying down on a sheet or a piece of art of some sort — with the numbers one through 12 surrounding him, one by one. By the number "5," there are two tiny, orange pumpkins, seemingly to signify little Jackson's age. He's dressed in an outfit featuring what looks like a warm, red plaid top, which is perfect for this chilly time of year.

As the son of Zach Roloff, whose family owns a farm, Jackson is likely to spend a lot of time there growing up. The Roloff family grows and sells pumpkins at that farm every year, according to PEOPLE, so it makes perfect sense that Tori (or whoever put the pumpkins by the "5") would use them as a prop in the Pinterest-ready photograph of baby Jackson.

In the caption for the Instagram post, Tori noted Jackson's age, and said that he "is grabbing everything" and "is super smiley in the morning and slightly grumpy in the evening." Yep, sounds like a pretty typical baby, all right.

Baby Jackson, according to his mom, loves bath time, and "can now lift himself up on his stomach," which is a pretty important skill for babies, according to Parents. He apparently has some teeth coming in, poor thing, and loves to hang out at the family pumpkin patch.

In the past, Tori has been pretty open about her experience as a mom. She's never really shied away from sharing every adorable moment with fans, even though it's backfired on her in the past.

In September, Tori was "shamed" for an Instagram Story video, in which a blanket and pillow seemed to be in Jackson's crib with him. Of course, crib safety is super important, but Tori wasn't having it when strangers judged her parenting choices from what they saw in a short Instagram video.

Luckily, Tori didn't let that incident stop her from continuing to share pictures of Jackson on social media, along with adorable stories and tidbits about the charming little guy.

In particular, it looks like Tori posts an update about Jackson at every month anniversary of his birth, and he's in a very cute outfit every time. Because if you're going to post a photo of your baby to social media, you might as well wrestle them into an adorable ensemble first, right?

Sharing photos of Jackson to Instagram may also be a way that Tori celebrates her son's milestones for herself. According to a PEOPLE interview not long after Jackson was born, Zach explained that his son — who was born with achondroplasia, a form of dwarfism, like himself — may take a little longer to achieve some things that other kids won't have as much trouble with. He told PEOPLE:

You have to encourage a dwarf child a little more because it will take them five steps to do what others can do in two.

But Tori and Zach are clearly prepared for that challenge. And Tori is more than happy to share in the experience of parenting Jackson with fans, every step of the way.