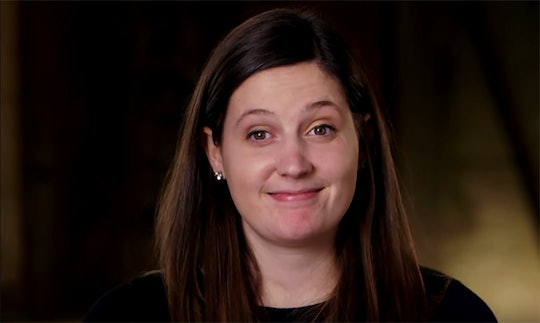 Little People, Big World star Tori Roloff has endured a few parenting mishaps in 2018. Not only did Tori's 1-year-old son, Jackson, suffer a painful arm injury, but she also experienced some instances of mom-shaming. But just when you thought the struggle couldn't get any more real for Roloff, on Sunday she underwent her toughest parenting moment yet. Want proof? Look no further than this hysterical photo Tori Roloff shared of Jackson covered in his own poop. It doesn't get any more real than cleaning sh*t off of your kid after a difficult day, right?

Roloff and her husband, Zach Roloff, have spent the past two months taking full advantage of summer. From visiting a local river in their hometown of Helvetia, Oregon with baby Jackson to taking a family trip to Disney World, things have been going pretty smoothly for the couple. As most parents already know, however, there's typically a period quiet before the storm. And Roloff learned this firsthand when she suffered a series of mishaps last week, culminating with a big blowout (no pun intended) on Sunday. Although Roloff could have kept her troubles to herself, she decided to share her experiences in hopes of buoying up "all those mamas out there" who "feel like they're sinking." Aww.

I share this with the risk of getting mom shamed (again- and for real I don’t care I don’t get humans sometimes). This is for all those mamas out there that sometime feel like they are sinking. That’s been me this week! But today in particular. Here’s hoping this brings you a good laugh and hopefully you’re Day was better than mine: started out with my husband waking up sick- his headache can’t move I’m dying sick. Now we did get to enjoy a lovely day with friends by the pool but that’s where the fun ended. I came home to Zach still being sick so I tried to play hard ball and get him up and moving- bad idea. He threw up on our front porch because he couldn’t make it to the bathroom (I guess I should be thankful it wasn’t inside). So then I had to hose off throw up from our front porch.

But things took an especially bad turn for the worse shortly after Roloff heard Jackson waking from his nap. Roloff penned:

I then come back inside to relax but heard Jackson awake in his crib. He often wakes up and just hangs quietly. I needed the extra time so I left him a couple minutes. After about 20 min I went in his room... this is where it gets bad. I noticed something on his face (of course I think it’s blood or something and start freaking out). As I moved closer the smell overcame me. I noticed brown spread all over his sheets and crib- and oh ya- that’s poop... IN HIS HAIR!!!! To make matters worse... we don’t currently have hot water in our house so I had to drive to another house to bathe him. So ya. That’s my day. If you were having a rough day I hope this helps. I can laugh now that Jackson is asleep in a throughly scrubbed crib.

Ah, the joys of scrubbing poop out of your baby's hair ... at someone else's house. It doesn't get much better than that.

Roloff ended her saga with some wise advice for first-time parents, adding:

ALSO: first time parents: never. Ever. Under any circumstances. Put your child to bed in just a diaper. Just don’t do it. We all have those days. Today involved both vomit and poop. I mean can tomorrow get any worse? Don’t answer that. #momlife #babyjroloff.

Ace advice. It's never a good idea to give a baby easy access to their poop. Enough said.

Of course, many parents found Roloff's photo hilarious. Not only is the pic incredibly relatable, but Jackson's "so what?" expression in it is priceless.

"Lol. My child did this once. It only took the one time," one fan wrote, according to Instagram. "Like you said 'never put a child to bed in only a diaper'. Don’t kick yourself for it. It’s all good mamma."

"That look on his face says. Not me Mommy the dog did it," another person joked.

A commenter chimed in: "Oh my lol! Wait until he learns how to take his diaper off (by pulling on the tabs) then you get to try to find the poop lol! #mommylife."

Others praised Roloff for keeping it real.

"Tori Roloff I love that your like me my kids did this as well," a parent penned. "You're not ashamed to let me know your just like me it's awesome so down to earth."

"Well, as the saying goes, sh*t happens! Tomorrow is another day and all that, a little bit of honesty on social media makes such a difference, makes other Mamas realize they’re doing the best they can too!" a fan said.

"I love your honest posts! This happened to me when my children were toddlers! I remember being horrified! But “____” happens," someone else joked.

So, here's to Roloff's honesty about the sh*ttier parts of her parenting journey. People love Roloff's unfiltered approach and her commitment to making other parents out there feel less alone.