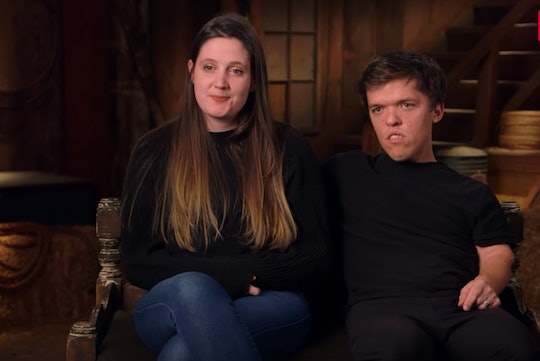 People love watching TLC's Little People, Big World to see Zach and Tori Roloff's super cute life as a family of three with their son, Jackson. Although Jackson appears to have a lot of interests on the show and on Tori's Instagram page, there is one thing that her son isn't the biggest fan of — playing dress up. Although it might be disappointing, Tori Roloff's post about her son's Halloween costume reveals a common struggle that parents go through — getting their kids to wear their Halloween costume for an extended period of time.

Halloween should be every kid's favorite time of the year. It's not every day that they can dress up as whatever they want, wear their costume out in public, and have strangers willingly give them as much candy as they please. But, Halloween isn't always so glamorous, especially for the little ones who hate wearing clothes for extended periods of time. Zach and Tori's 2-year-old son, Jackson, falls into this category.

Over the weekend, Tori took to Instagram where she shared the absolute sweetest photos of Jackson wearing a Buzz Lightyear from Toy Story costume. Jackson's face is so adorable in the photos, but things weren't as picture perfect behind the scenes — according to her Instagram caption, he hated that he had to wear it for a period of time.

"I caved and bought a costume for Jackson thinking it was going to be so fun to dress up as his favorite character, Buzz!," Tori wrote in the caption of the post. "I was wrong. He hates it haha."

"Only posting this photo (after telling him I'd take it off if I took a picture) because I don't think he'll ever let me put it back on. Maybe next year...," Tori added.

Although Jackson looks so adorable (and just a little unhappy) in his costume, you can't really blame him for feeling this way. While some Halloween costumes might look like a great time, they can be very uncomfortable, especially when walking from house to house in it. Tori is far from alone in her struggle — a simple Google search brings up a handful of blog posts written by moms with kids who rejected their Halloween costumes. While some parents try to employ some seriously convincing tactics to get their kids to wear their costumes, sometimes it's easier to accept defeat, put on that timeless pair of animal ears, and have them go as a cat for the third year in a row.

Clearly, other parents can relate to Tori, too, taking to the comments to share their struggles with their own kids.

"My son did the same," one mom wrote.

"My son hated dressing up. He refused. His "costume" became jeans, a Halloween sweatshirt, and Halloween hat. That was the extent of it," another mom hilariously added.

Looks like Tori will have to fight this battle.

But she won't be fighting the battle alone for too long. Tori is currently pregnant with her second child (they're having a daughter, according to InTouch Weekly), and is due some time in November. This will be Zach and Tori's last Halloween ever as parents of one, which means their struggles with little ones and their costumes are far from over.

Hopefully this time next year, Jackson comes around to wearing a costume. And who knows? Maybe her daughter will feel differently about them.