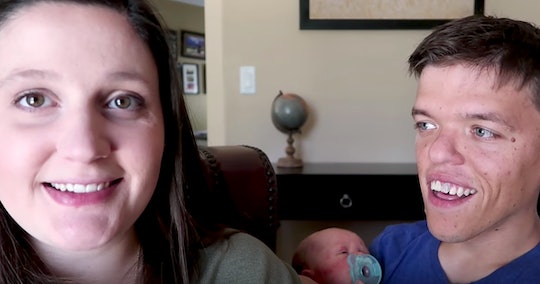 It's already been a month since Zach and Tori Roloff welcomed baby Jackson Kyle into the world, and if Tori Roloff's postpartum Instagrams are anything to judge by, the couple have been enjoying their new arrival immensely. One-month-old Jackson has already shown up in a few TLC clips of Little People, Big World, and everyone — from his parents to his uncle — seem to be in love with the little guy. (Once you see pictures, it's easy to see why.)

Jackson was born on May 12 with achondroplasia, the same kind of dwarfism that his father Zach has and which can cause health problems early on in babies. Fortunately, it seems like things have gone smoothly for baby Jackson, and his parents aren't too concerned. As Zach explained in a TLC clip:

We'll hope to just give him a healthy, happy life and support him in every way. ... He might have to take two steps for everyone else’s one step, but hopefully we can raise him in a way that it won’t bother him.

"He seems like a pretty stubborn kid already, so I think he's got it under control," Tori added in the clip. "It's been pretty easy."

Luckily for fans, Tori has done an awesome job of documenting the postpartum life on Instagram. Here's a peek at her life with baby Jackson:

Less than a week into motherhood, Tori already knew parenting was what she was "meant to do."

Even if you don't like the team, a baby in a sports outfit is just the cutest thing in the world. Especially since babies are just slightly larger than a football.

Anyone who owns a dog knows they're as much a part of the family as anyone else. Zach and Tori had to say goodbye to a future they'd envisioned with their dog Sullivan as part of their growing family, and it was a sad moment that came soon after they'd welcomed Jackson into the world.

Thanks to ridiculous magazine covers, women often think that they need to bounce back to their pre-pregnancy shape immediately after having a baby (ahem, as if keeping a tiny human alive weren't difficult enough). But clearly, Tori's got nothing but respect for what a mom's body can accomplish, and she's ready to share that positivity with her followers.

Tori took some time to deck out Jackson's adorable nursery, and that hard work clearly paid off.

Is it normal for kids to be sleeping for six-hour stretches one month in? Can every other parent be jealous yet?

They're only a month into parenting, but it's clear from photos that Zach and Tori are loving the addition of baby Jackson to their family. Here's to seeing much more of him as he grows up!