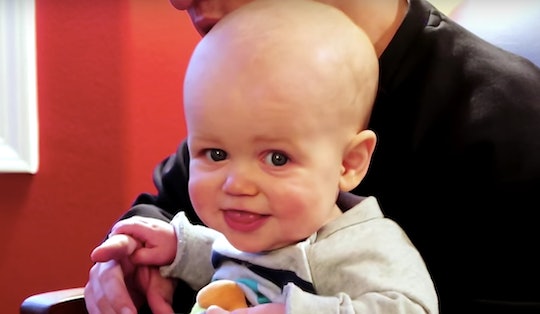 The Roloff family returned to TV on April 3 for the newest season of Little People, Big World, and fans are so excited to watch how this next chapter of their life unfolds. Though it's hard to believe that the Roloffs have been on TV for 12 years now (yes, you read that correctly) a lot has happened over the decade or so, and what started as watching Matt and Amy raising their family has evolved into watching their kids parent as well. It's particularly exciting to watch Zach and Tori Roloff on their journey as new parents to Jackson, who was born last year. Tori Roloff's quotes about Jackson prove she's completely in love with being a mom, and fans are completely in love with watching her do it.

Zach and Tori have opened up previously about the challenges that come with being new parents. They told Us Magazine it was a "huge adjustment" and that the first few weeks of parenthood are definitely the most challenging to adjust to, which anyone who has ever had a baby can probably relate to. Nevertheless, it's beyond clear that this family is happier than ever, and enjoying their lives both on-screen and off. Below are some of the sweetest things Tori has said about Jackson, and if your heart wasn't melting over them before, this will probably do you in for good.

When Jackson Was First Born

The very first photo of Zach, Tori and baby Jackson appeared on Tori's Instagram back in May of 2017. The happy family posed together in the hospital where Tori gave birth, and she told her son how much his dad and her love him on Instagram.

Mom and Dad are so in love with you already.

A few days postpartum, Tori posted another sweet shot from the hospital, saying that she had fallen completely in love with her son and that she was sure being a mom is what she was "meant to do."

My heart is so unbearably full. I've only spent 4 days with this little guy and I have fallen In love completely with him. This is what I was meant to do. Mommy loves you, Jackson!

When Tori introduced Jackson to solid food and officially finished breastfeeding, she shared a sentimental post saying, though she was happy to see her son reaching new milestones, she did feel like it was time to "let go" of her baby a little bit. "We worked so hard to get where we are with BFing and I’m proud of the two of us," she said in the caption. "But it was a glimpse into baby J already becoming more independent."

I’m feeling just a little sentimental tonight... after breastfeeding for the last 6 months we introduced solid food to Jackson tonight. Although we’re still doin our thing it felt like the first time I have to let go of my baby a little. We worked so hard to get where we are with BFing and I’m proud of the two of us but it was a glimpse into baby J already becoming more independent. Before i know it he’ll be in college right? It all goes by so quickly. The other day I looked up the meaning of Jackson and it is this: God has been gracious; has shown favor. Are you kidding me? That’s exactly what I feel every time J looks at me with those beautiful blue eyes. i never knew one person can make you love so much. He makes me love God more, and Zach more, and myself more. i just pray this boy knows the love he exudes and that he shares it with the world always.

On Why Life After Motherhood Is Actually Amazing

Tori responded to the idea that after you have a kid your "life is over," saying that it upsets her to hear it said so often. She went onto say that after becoming a mom, it felt like her life had really just begun.

One thing I’ve heard a lot lately on social media, and tv, and even in person has me a little upset... I hear people talking about how “life is over” when you have a kid. I think this is such a lie. I have found life after having a kid. I’ve found something I can completely pour my soul in to and something that gives me purpose. I hear people tell others that “ah it’s all over from here”... what is? The fact that I can’t stay out all night partying (that’s cool my bedtime is 9 anyway). Having a kid is honestly a gift I know i don’t deserve from God. Life isn’t over when you have a kid... it’s only just beginning!

On Missing Your Kid After Just A Few Hours Apart

Tori shared a super sweet snap of Jackson saying that though she loves bath time, she misses him from the time he goes to bed until he wakes up again in the morning. She went on to say that she agrees there "aren't enough hours in the day," but not because she doesn't have time to get chores done — rather, that there's not enough time to hang out with her little guy. (Awwww.)

On Being Obsessed With Her Son

Toe beans and toofies. I'm obsessed with everything about you.

On Why Her Heart Is "Bursting With Joy"

Tori shared a photo of Jackson peeking out from his crib saying her heart "doubled in size" when she became a mom.

I swear your heart doubles in size when you have a child. Sometimes I feel like my heart may burst with joy. I love you, bud.