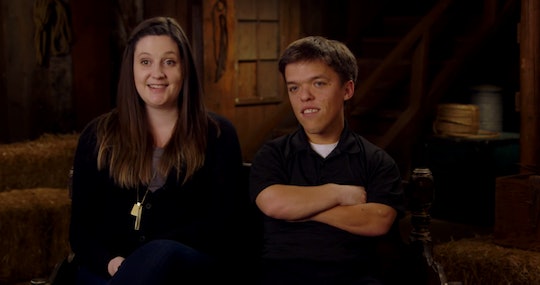 The first year of a child's life seems like a constant stream of amazing firsts — that first smile, rolling over for the first time, sitting up unassisted, crawling, pulling up, and finally those first steps. After that, your child is still learning and growing rapidly, yes. But it's a bit more subtle once they reach toddlerhood. However, there are certain milestones during year two that tend to tug at parents' heartstrings more than others — lke making the transition from a crib to a toddler bed. And recently, Tori Roloff's son graduated to a "big boy bed" ahead of his baby sister's arrival.

If you lost track, the Little People, Big World couple have a 2-year-old son, Jackson — and they're currently expecting baby number two. Tori's due date for her baby girl is in November. So in just a few months, there are going to be some huge changes going down in the Roloff household.

Well apparently, little Jackson recently experienced a pretty big change in his sleeping arrangement, according to Us Weekly. That's because Tori took to Instagram on Friday, Aug. 23 to share a couple of photos of Jackson in his brand new toddler bed. "First night in his big boy bed! You can stop growing now Jackson!" she wrote alongside a crying-face emoji and a blue heart emoji. Just look how big he is!

Seriously though, isn't he the cutest?

When one Instagram follower asked how Tori and Zach decided Jackson was ready for the transition to a big boy bed, her answer was honest — and pretty darn relatable. "We’re having a baby and didn’t want to buy another crib. haha that’s how we decided he was ready!" the expecting mom replied. (Which, same here.) I mean, no need to go out and buy another crib when your toddler can just make the switch, right?

For the record, there is no magic age that toddlers should stop using a crib. One thing to keep in mind: It's probably best — if you're making the switch from a crib to a toddler bed — to do so at least six to eight weeks before the new baby's due date, according to BabyCenter.

In general, though, most kids made the transition to a "big kid bed" between 18 months and 3.5 years old — and ideally "as close to age 3 as possible," according to WhatToExpect.com.

The timing is different for every child, but if he's hit 3 feet in height, makes a jailbreak on a daily basis or repeatedly asks for a big-kid bed, it's probably time to ditch the crib.

Considering Tori's due date is in November and Jackson is 2 years old, I'd say the timing seems pretty ideal. I wonder if the Roloffs will give fans an update on how the first night/week went? Hopefully Jackson and his parents have all been able to get some shut-eye since ditching the crib.

And hey, if the transition was a bit rougher than they anticipated — and Jackson needs to remain in his crib a bit longer — his baby sister will probably be using a bassinet for the first couple of months anyway. From one mom to another, I wish you the best of luck, Tori!