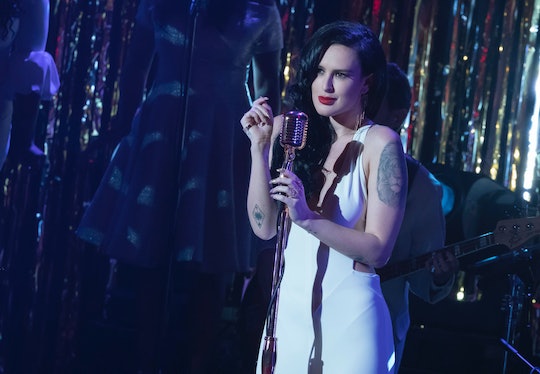 Empire has no shortage of guest stars that show off their singing chops. One of them is Dancing With The Stars alum Rumer Willis, who was introduced as Jamal's friend from rehab, Tory Ash. Tory is based on troubled singers the Empire audience is familiar with: she's an amazing artist, but was afflicted with drug addiction. Viewers saw Tory sing with Jamal in her first appearance, but in Wednesday's episode, "Love is a Smoke," they really got to experience her talent. Tory Ash's Empire song "Crazy Crazy 4 U" showcases Rumer Willis' outstanding vocals.

The Empire audience can probably tell whom producers took most inspiration for Tory's character: Amy Winehouse. In an interview with The Hollywood Reporter, Willis spoke about playing the role. "My agents had reached out to me and said, 'Hey, there's this role on Empire to do this Amy Winehouse-type rock star,'" she said. "I was like, 'I don't need to see anything else. I'm going in." When Tory was introduced, not much was known about her except her talent and her drug addiction. According to Willis, though, there is much more to Tory than a Winehouse copy. "You have to really find what's someone trying to cover up with their drug use and why they might be feeling like they want to use it as an escape," she hinted in the same The Hollywood Reporter interview.

Empire fans not familiar with Willis may be wondering: is it really her singing? She may have won DWTS, and she's acting her heart out on Empire, but is she a triple threat? As it turns out, yes; that is Willis singing on "Crazy Crazy 4 U." She has been singing since she was little, but hadn't found a musical path for herself until now. The song, which Willis described to Billboard as a "song you would hear at a speakeasy in the '20s with an updated beat," definitely showcases her voice. It's a sultry, passionate song that evokes Amy Winehouse and is guaranteed to make viewers get up on their feet and dance.

As the season goes on, viewers can expect more from Tory — and hopefully, more soulful songs like this as well that you'll find yourself wanting to listen to over and over again. For now, fans can check out Willis' rendition of Lucious' song "Crazy Crazy 4 U" on Spotify or they can buy it on iTunes.