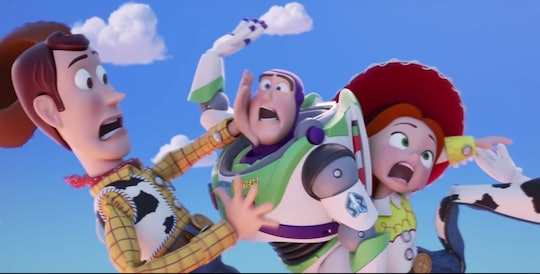 Woody, Buzz Lightyear, Jessie, and the rest of the Toy Story gang are back, and their next adventure is going to be all-out chaos. At least, that's what it seems like in a sneak peek of its next installment. After months of anticipation, Toy Story 4's first teaser trailer is finally here, and there's a new toy in town who's running amok. But who is Forky? Why is he there? Is he even a toy? There are so many questions.

To the delight of Toy Story fans everywhere, Disney quietly dropped the teaser trailer early Monday morning, according to E! News. And it looks like Andy's team of sentient toys is getting along just swimmingly. Woody, Buzz Lightyear, Jessie, Rex, Ham, and the rest of the Toy Story buds are holding hands, floating through the air as Joni Mitchell's "Both Sides Now" plays in the background, E! News reported. Everyone is just so happy being together.

Then, halfway through the trailer, Forky, voiced by Tony Hale of VEEP and Arrested Development fame, becomes alarmed. In a fright, he screams, "I don't belong here!" and runs off. The rest of the gang begin crashing into each other, and panic ensues.

Check out the teaser trailer below!

But who is Forky, the spork with red pipe cleaner arms? The studio writes of the new makeshift toy, according to HuffPost:

Woody has always been confident about his place in the world and that his priority is taking care of his kid, whether that’s Andy or Bonnie. But when Bonnie adds a reluctant new toy called 'Forky' to her room, a road trip adventure alongside old and new friends will show Woody how big the world can be for a toy.

Ask Forky, though, and he'll have a different answer. At the end of the trailer, Hale's Forky yells, "I'm not a toy," with a panicked look on his face, and again, runs off, according to E! News. In the distance, you could hear Woody shout to the group, "Hey! Hey! Somebody get him before he pokes an eye out."

I mean, Forky is a spork, so he probably wouldn't do that much damage. After all, a spork can't even get through the rubber-like stuffed shells they give you at lunchtime during middle school. I'd be surprised if Forky even causes a scratch. But it's probably a good idea for Ham or Jessie to wrangle him.

Toy Story 4 is being directed by Josh Cooley, who told ScreenRant in a statement:

Like most people, I assumed that Toy Story 3 was the end of the story. And it was the end of Woody's story with Andy. But just like in life, every ending is a new beginning. Woody now being in a new room, with new toys, and a new kid, was something we have never seen before. The questions of what that would be like became the beginning of an entertaining story worth exploring.

The fourth installment in the Toy Story franchise hits theaters June 21, 2019, according to i09, so fans have a few months to wait before Woody and his crew get out of the toy box and go into the wild. But if the teaser trailer is any indication, it looks like it'll definitely be worth the wait!

More Like This
All The Family Movies We’re Looking Forward To Seeing In 2022
'Weird: The Al Yankovic Story' Is A Pitch Perfect Biopic Parody (Because Of Course It Is!)
The New A League of Their Own Trailer Just Dropped & It Looks So Good
Nick Cannon Welcomes Baby #8, His First With Bri Tiesi, In Beautiful Home Birth