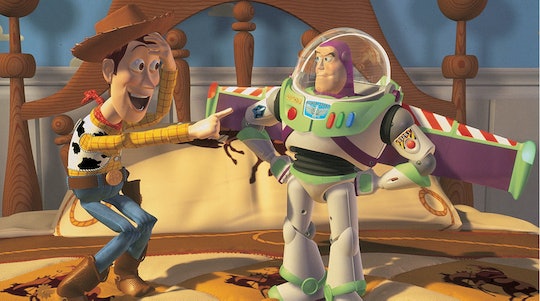 There are some things from your childhood that are almost impossible to let go of — like your favorite animated Disney and Pixar films. The best part about these films, however, is the fact that the more people continue to grow, their favorite movies never leave them. Longtime Disney fans are about to get really excited because Disney recently announced the release dates of a whole bunch of news movies. You might be even more excited to know that Toy Story 4's release date is finally here and you can start freaking out, like, now.

Toy Story is one of those films from your childhood that never gets old. I mean, how could it? Between the concept of toys coming to life while humans aren't around to the eclectic group of characters with their own bold personalities, it was hard not to fall in love with Toy Story on first watch. And their subsequent sequels, Toy Story 2 and Toy Story 3 have definitely lived up to the greatness of the first movie. But now fans will have a new sequel, Toy Story 4, to fall in love with very soon and they won't have to wait long at all.

Toy Story 4, according to Parents, will be released on June 21, 2019 and it's completely acceptable to start getting excited for it already.

That's almost exactly one year from now, which is plenty of time for you to prepare yourself and get excited for all of the goodness that is about to come. A year gives you enough time to watch all of the Toy Story films (over and over again) to get you super pumped and prepared for the newest film. Not only that but it will allow for you to get your kids super acquainted with the characters (if they aren't acquainted already). So by the time the movie's premiere rolls around, you'll be so hyped.

From the sounds of it, there is a lot to get excited about. If you've been living under a rock and had no idea that a Toy Story 4 sequel is in the works, there is a lot more that you need to know about the new film than just the release date. If you were afraid about losing any of your favorite characters, then you shouldn't be. It has been reported that the majority of the key characters (and their beloved voice actors) will return, according to The Independent. This means that you can count on Woody, Bo Peep, Buzz Lightyear, and Jesse all coming together in this new film.

If you've felt like you've been waiting forever for this sequel to go anywhere, you are not alone. It was first announced that Toy Story would be coming back in 2015 (as in, three years ago), according to Us Weekly, when Disney Chief Creative Officer John Lasseter made the big reveal that Toy Story 4 would be a love story. In 2015, it was also reported that actors Rashida Jones and Will McCormack would be penning the script (they've since left the project, according to The Independent) and Patricia Arquette would be lending her voice to the role of an un-named character who is "a laid back mom who's described as a hippie," according to Collider. But in those three years, a lot has changed. Jones and McCormack have left the project, according to The Independent, and Josh Cooley will direct the film, according to Entertainment Weekly.

But the fact that so much is unknown about this sequel makes it all the more exciting. All Disney fans know that Disney always gets it right. This new Toy Story film will be no exception to this.