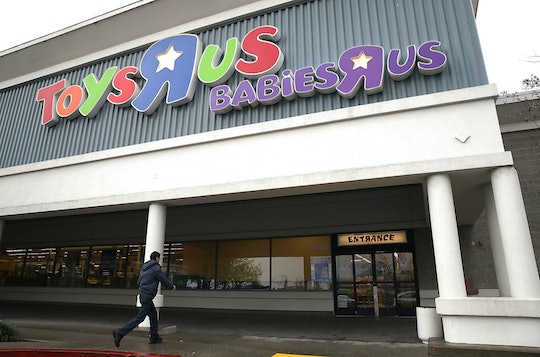 Here's When Toys "R" Us Stores Will Probably Close

As a mom, I've definitely had a love/hate relationship with Toys "R" Us. It was where I excitedly registered for baby items while pregnant, and it's long been my go-to store for gift-buying, but it's also somewhere I hate actually taking my kids, because I can only say, "no you may not have that $200 Barbie dream house" so many times before my brain explodes. It was still sad to hear that the iconic toy store is closing down though, and although Toys "R" Us closing dates have yet to be officially announced, it sounds like it won't be long until we all have to say goodbye for good.

After initially filing for bankruptcy in September 2017, Toys "R" Us announced in a press release earlier this month that it has filed a motion "to begin the process of conducting an orderly wind-down of its U.S. business," which will include the "liquidation of inventory in all 735 [stores]," across the country. And though the statement indicated that further details regarding liquidation sales and specific closing dates are still to come, an estimated 170 stores already began liquidating stock in February, according to USA Today. And given that the one-time toy giant is expected to run out of money in May? It's likely that the remaining stores will soon follow suit.

Yet as much as consumers might be bummed out by the notion of Toys "R" Us' demise, the nostalgic love many of us seem to have for the store hasn't exactly helped much: during the all-important holiday season, Toys "R" Us failed to even come close to its projected sales goals, according to Reuters, a fact that only further cemented its financial troubles. Now, as many as 30,000 jobs are thought to be on the chopping block — likely without severance pay — and Reuters also noted that many vendors may end up not being paid for their shipments.

It's expected that Toys "R" Us will be granted court approval Tuesday to formally begin the liquidation process at most of its locations, according to CNN, so the good news for customers at least, is that they'll likely soon be able to purchase Toys "R" Us stock at some pretty steep discounts. As is often the case with going-out-of-business sales, sales will probably start off modestly (think around 20 to 30 percent off), but as closing dates approach, toys will likely go for as much as 75 to 80 less than the original price.

Given that the company isn't expected to last much longer financially though, experts seem to agree that we can expect to see stores close within the next 60 days, according to CNN, though individual closing dates may vary depending on location. But there are other important details customers should know: gift cards and store credit will be honored only for the next 30 days, according to CNN, and online gift registries will be maintained for a "few weeks." Have a return? You'll probably want to make it now. And, of course, any items purchased during the liquidation period will be final sale.

As bad as the situation is for Toys "R" Us stores in the United States though, it's actually not a whole lot better for those in other countries. In the UK, Toys "R" Us has already begun the process of closing all of its 100 stores, according to BBC News, with 25 stores already shuttered and the remaining 75 expected to be closed within the next six weeks. Stores in France, Spain, Poland, and Australia are also expected to liquidate, according to Business Insider, while Toys "R" Us is thought to be looking for a buyer for its Canadian and Asian stores.

In other words? If you're a Toys "R" Us shopper with gift cards, store credit, or outstanding baby registry items, you're going to want to get that sorted out immediately, and if there's something you've been meaning to pick up, it sounds like you'll soon have a chance to do so at a discount. But given that Toys "R" Us doesn't seem to have any intention of dragging out the liquidation process, you probably shouldn't wait a whole lot longer to hit up the closing sales.

And when you do, it might not be a bad idea to be extra -friendly to the sales staff. After all, as much as we might be sad to see the store go — and, let's be honest, as much as it might be nice to save a little money on our kids' toys — they are the ones who will really be feeling the loss when Toys "R" Us closes its doors.