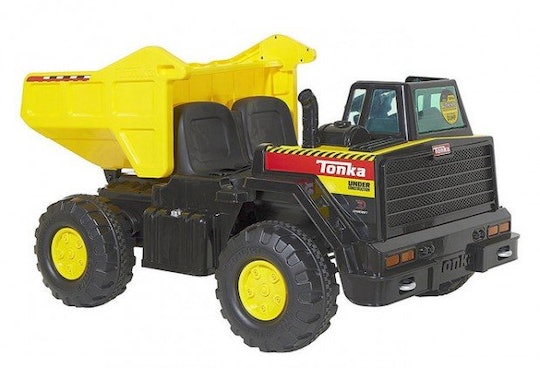 Just as holiday shopping kicks into a full gear, a scary incident has prompted parents to remove at least one toy from their kids' wish lists. After a toy truck reportedly burst into flames, Toys R Us removed the Tonka Truck model from store shelves, pending an investigation. The company has not issued a full recall as of yet.

Update: In reiterating its original statements to Romper, a Dynacraft spokesperson wrote in an email that the company is "aware of what appears to be an isolated incident and is in the process of thoroughly investigating the matter" and "in an abundance of caution, the item is currently not being sold pending that investigation."

The fiery incident that led the toy company to stop selling the Tonka 12V Ride-On Dump Truck happened last week after a family in Washington brought the toy car as a Christmas gift for their grandson and it allegedly caught fire twice on the drive home. Romper reached Tonka Truck’s manufacturer, Dynacraft, for comment, and is awaiting a response.

According to NBC News, the family from Bellingham, Washington said they bought the Tonka 12V Ride-On Dump Truck from a local Toys R Us store on Friday, Nov. 18, but the toy burst into flames in the back of their pick-up truck on the way home. Delmond Harden, the grandfather, told NBC News that after the toy first ignited, he pulled over to put out the flames. But, as they drove back to the store to return the malfunctioning toy, it caught fire again, spreading flames to his own car.

Last week, Harden told NBC Seattle affiliate KING, "The firefighter ... doused the truck with water and I'm, I still can't believe it, we almost shut (Interstate)-5 down, and it was just a toy for our grandson, who would have known."

While the toy is still under investigation following the startling incident, the company has reportedly not decided to instate a full recall of the toy.

"Out of an abundance of caution we pulled the item from our stores and Toysrus.com pending further investigation." Toys R Us spokeswoman Nicole Hayes told Romper. "The manufacturer, Dynacraft, is leading the investigation into this matter to determine the cause."

Hayes told Fortune that the incident appears to be an isolated one. As of Monday, the toy was still unlisted on the store's website.

According to released statement on Dynacraft's website, the company "is in the process of thoroughly investigating the matter." The statement continued:

In an abundance of caution, the item is currently not being sold pending that investigation. Safety is at the forefront of the Dynacraft company and an area that the Senior Management takes very seriously. Dynacraft is working around the clock in cooperation with their supplier and the Toys "R" Us Management team to identify the cause.

If any customers who have bought the 12V Tonka Might Dump Truck ride-on and have safety concerns, Dynacraft has recommended that they contact the company 800-551-0032 or send an email to service@dynacraftwheels.com. You can also reach out Toys R Us at 800-869-7787 with any questions or concerns.

The incident happened just one week before Black Friday, one of the busiest shopping days in the United States that marks beginning of the holiday shopping season. Of course, it's always a bummer when a hot toy gets taken off shelves for any reason, especially when some best shopping deals of the year are in full swing. But, as every parent (and toy manufacturer) knows, a child's safety is always the top priority.