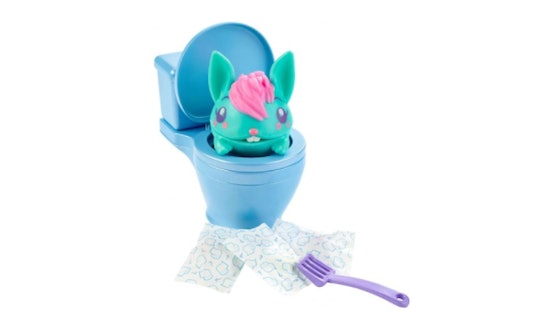 Pooparoos Are The New, Super Weird Toy Your Kids Will Totally Freak Out Over

I never feel more like an adult than when a new, bizarre cult toy comes out on the market. Some adults live for kids' toys, but I'm usually left with a slightly puzzled look on my face, wondering how on earth kids could play with things like Fingerlings for hours. But just when you think toy manufacturers have thought of the weirdest possible toys already, they prove you wrong. Case in point: Pooparoos. Pooparoos are the weirdest new toy your kids have to have.

Pooparoos are equal parts potty humor and cuteness mixed into a toy your kids will definitely want to have, despite the fact that you might never totally understand why. Pooparoos, made by Mattel, are little plastic figurines that come packaged inside a tiny potty. When you purchase this tiny potty with hard-earned money, you'll get to open it up and discover which Pooparoo you have, for better or for worse.

Then, to make matters possibly stranger, you open the back of the toilet and take out three tiny packets that look like they might contain a mint or an aspirin. But no, they're actually Pooparoo food... and poop — future poop, to be more precise. Fill the toilet bowl with water and one by one, put those tiny packets into the toilet. Take the included pooper-scooper-esque spatula to stir the packets around until the paper dissolves and the teeny-tiny Pooparoo food-creatures are revealed. No, really. They look like donuts with faces. Some look like hot dogs, and some look like macarons. Told ya, it's pretty weird.

But at that point, you're not even done yet! Despite the fact that you just took the tiny foods-with-faces out of the toilet, you then feed them to your Pooparoo. You pop them right into the Pooparoo pie-hole and then, thanks to the digestive cycle, you squeeze your Pooparoo to pop them out... of the other end. Luckily, they remain intact through that process, so while Pooparoos are named after the bodily function, you can almost play with them without really thinking about the actual thing they are.

When you buy a Pooparoo, you aren't able to see which of the eight possible Pooparoos you're getting — will it be the purple one with green hair, or maybe the brown one with pink hair? Either way, we know most of you are hoping that you might just open up that toilet seat to reveal the unicorn Pooparoo. Yes, that's right, Mattel went there. A unicorn Pooparoo that poops macarons. Doesn't it feel so very 2018?

There are even more surprises to come, because there are over 40 different kinds of poop-food. But fair warning, if you want one, you'll have to act fast or be ready to shell out even bigger bucks. The little creatures which usually go for just under $10 are sold exclusively at Walmart for now, but they're already sold out at the time of this posting. There are a few offered on Amazon from various sellers, but their prices are soaring over $40 already!

While you might be tempted to justify the little toy as a good investment for potty training toddlers, you'll have to think of another reason to get one for your kid. The toy does sort of help elucidate the process by which food turns into waste, but the small pieces make it a choking hazard for kids under age 4. So if you invest in a Pooparoo, make sure to keep those smiling macarons and cupcakes with eyelashes away from little kids, lest the Pooparoo take a more serious turn.

But as the Mattel Facebook page pointed out, the toys are fairly irresistible: "The life of the potty!"

Who can argue with that!