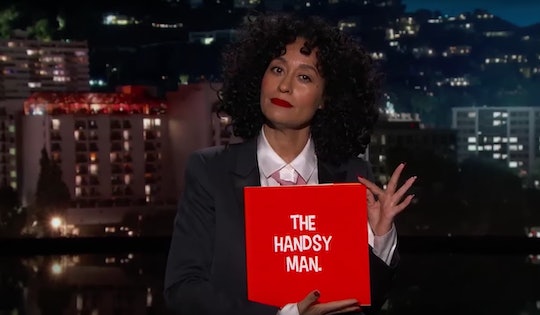 It's a strange time to be a creepy man in the world. As #MeToo stories continue to emerge and harassment allegations take down famous men's careers, a good number of men actually seem confused as to what counts as harassment, with some asking if they can still compliment a coworker's hair or hug their female friends post-Weinstein. Since there seems to be a fair bit of confusion, Black-ish star Tracee Ellis Ross created a children's book explaining harassment to "handsy men" for Jimmy Kimmel Live! And yes, you better believe it's just as good as it sounds.

As guest host for Jimmy Kimmel Live! on Tuesday, Ross took it upon herself to educate the myriad of men out there who seem to be confused about what sexual harassment entails as they watch sexual misconduct stories take over headlines. (As one male sales associate recently asked CBS News: "Have we gotten to the point now where men can’t say, ‘That’s a nice dress’ or ‘Did you do something with your hair?' The potential problem is you can’t even feel safe saying, ‘Good morning’ anymore.")

I think it's fair to say most women find that confusion worthy of an eye-roll, and it seems like Ross just might agree.

"While I’m not totally surprised by these stories, it seems like quite a few men are," Ross said on Tuesday, speaking of recent sexual misconduct scandals. "Treating another human being with respect isn’t complicated, but it seems a bit confusing for a lot of men out there, so I wrote a book."

You can watch Ross read the full book below (fast-forward to 1 minute and 22 seconds in if you want to skip her introduction, but I wouldn't):

"There is a guy, with 10 long fingers, creepy glares, and hugs that linger," Ross begins her story. "If you're a woman, you're not a fan. I speak, of course, of The Handsy Man."

She then takes viewers through a hilarious, Dr. Seuss-esque explanation of consent and sexual harassment, and she uses humor to shine light on how silly it is for people to even be asking what counts as harassment. In recent cases that have taken over headlines, the abuses of power have been pretty clear, as Ross points out.

We're not talking about a coworker offering up a "Good morning" — we're talking about indecent exposure, unwanted touching, and ick, those creepy back massages that guy in the corner office keeps giving us when he stands behind our chairs.

Ross' Jimmy Kimmel Live! reading of "The Handsy Man" took place less than 24 hours ago, but fans have already expressed their love for her segment online:

A few people were disappointed that Ross would joke about a serious topic, but Ross made it clear that harassment wasn't being belittled. Instead, she was using humor as a way to highlight a serious problem (and make a bit of fun of the men who didn't seem to understand it). "[This] is a systemic problem about the abuse of power that takes place across all industries, and had enabled a culture of inequity to persist for far too long," Ross said on Jimmy Kimmel Live! before starting her reading.

It looks like "The Handsy Man" isn't actually a book people can buy (yet) but fans online have already asked for Ross to publish it (and, to make a good thing even better, to donate the proceeds to an organization that helps victims of sexual assault and harassment). The perfect gift for the handsy man in your life. Or office. Or plane ride. Just so all the handsy men in women's lives are clear on what harassment is — and have no excuse for it later on.