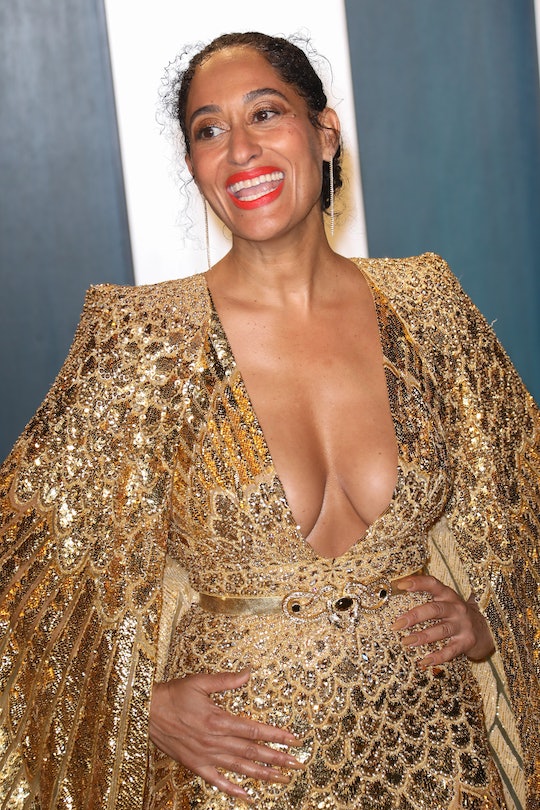 Proving that there's always a reason to look fabulous, Tracee Ellis Ross' Emmys look was beyond fabulous. Just because the nominees didn't walk a red carpet doesn't mean they didn't show up and show out. The Black-ish actress was nominated yet again for Outstanding Lead Actress in a Comedy Series and she took the opportunity to walk a small red carpet of her own in what appears to be her backyard and the photos are incredibly beautiful.

In a tweet referencing where she got every piece of her look — including her hair, which she styled herself — Ross described her experience with the Emmys in 2020. "How fun to get dressed up!" she wrote. "Can't say I miss the frenetic energy of the red carpet or wearing heels but boy do I miss a pretty dress." The dress was Alexandre Vauthier, while her shoes were classic Jimmy Choos and the jewelry was vintage Tiffany & Co.

Along with receiving a nomination, Ross also presented an award with host Jimmy Kimmel. After a short bit about wanting to go home without actually doing the presenting, Ross showed off her look while presenting Daniel Levy with the Primetime Emmy Award for Outstanding Writing for a Comedy Series. Suffice it to say, the gown made the moment.

Ross' show Black-ish follows her character Rainbow, her husband — played by Anthony Anderson — and their four children as they navigate life in a posh neighborhood. Throughout the series, the family questions the assimilation that has come with their successful life, providing comedic relief in droves.

As glorious as Ross looks on-screen, her Emmys look proved that she can strut her stuff even in the strangest of times. Brava, madame.