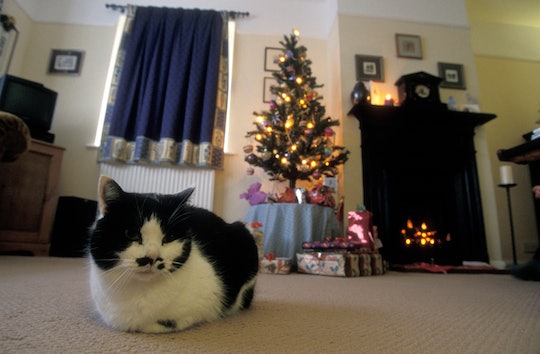 If you're anything like my cat-owning family, then the only ways furry friends participate in the holidays are by knocking ornaments off the Christmas tree, playing in piles of wrapping paper, or stealing treats off the countertop. However, this year felines can get in on a tradition typically enjoyed by their owners. (Pet parents rejoice!) Because Trader Joe's cat Advent calendar is a purrfect holiday countdown.

That's right! While your kiddos spend 25 days opening up their Hatchimals or Disney Advent calendars, your cat can enjoy daily treats leading up to Christmas day — all thanks to Trader Joe's. The grocery store chain will be releasing an Advent calendar especially for cats, according to PopSugar. Apparently, the Advent calendar is packed with tons of tasty goodies for your kitty. Vice president of merchandising, Colin Fields explained in the grocery chain's podcast Inside Trader Joe's that the cat calendar features treats made from salmon and seaweed. The grand finale: A giant fish-shaped treat on Dec. 25.

Dog parents might remember the $6 dog Advent calendar offered by Trader Joe's in 2018. Evidently, the product did so well last year that they were inspired to create a product for cat parents, too. "Last year we came out with the dog Advent calendar, which seemed pretty odd until we got out in the stores and there was quite a following for it," Fields explained during a recent episode on the podcast "And we heard from our feline-loving customers that we should have something for their cats. So we found it, we developed it, and it's pretty cool."

But yeah, it's probably best for humans to stick with chocolate-filled advent calendars. (Or maybe cheese, beer, or wine-filled advent calendars from Aldi.) Because the treats in this calendar are only tasty to your feline friends. Just ask vice president of product marketing, Matt Sloan, who sampled one of the treats during the Inside Trader Joe's podcast. "You know what? That's not good. But I'm not a cat," Sloan confessed. (Yuck!) "But if you're a cat, you'll really like that," Fields added.

In case you were wondering about what other people think of the concept of a cat Advent calendar, Twitter seems to be pretty pumped. "Anybody going to Trader Joe's today? My cat needs an advent calendar BADLY," one Twitter user wrote.

Another person tweeted, "Another reason to rejoice and love Trader Joe's."

Yet another Twitter user declared, "My cats suddenly got religion and demand that I honor their heritage."

It isn't yet clear when you'll be able to snag one of these festive calendars for your kitty. Based on the timing of last year's release of Trader Joes' dog Advent calendars, though, it's probably safe to expect the cat Advent calendars to drop sometime in early November.

As a proud cat mom of three (and human mom of four,) I'm not gonna lie: I adore the idea of a cat Advent calendar. With that said, I won't be splurging on three of these awesome products this year. I think we'll probably just stick to our tradition of buying one of those $5 festive stockings filled with cat toys and catnip, and call it good.