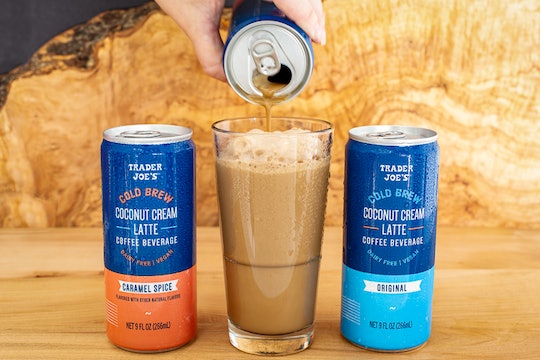 Trader Joe's is one of the world's most perfect stores. They always have something new and innovative, and at a price that won't make you flinch. Some of their best products are their individually packaged drinks and snacks, perfect for enjoying on-the-go. Since 2016, TJ's has stocked their cold brew latte in a can, delighting coffee lovers across the country. Now, Trader Joe's cold brew coconut cream lattes are introducing that love to those who don't drink dairy products.

Available in two flavors: original and caramel spice, the lattes are 9 ounces of creamy coffee goodness for the low price of $1.99 per serving. In the era of the $6 latte, that is a real steal. Trader Joe's noted that these cold brew coconut cream lattes are made with 100 percent Brazilian arabica beans, and that the coconut cream is sourced from Sumatra and Indonesia, regions long praised for their ability to produce the highest quality of coconut product. Sweetened with cane sugar, these lattes have all the goodness of the traditional blend with none of the dairy, which is great for those with sensitive stomachs and vegans alike.

The original flavor lets the subtle notes of coffee and coconut cream shine in abundance, with a touch of sweetness that doesn't overwhelm the palate. Meanwhile, the caramel spice is a bit more involved, perfect for fans of flavored lattes from bigger chain coffee stores. TJ's noted that when you take a sip of the caramel spice flavor of Trader Joe's cold brew coconut cream latte, you will pick up on hints of orange peel and cinnamon, along with the distinct creamy mouthfeel of rich caramel.

That's wonderful, and I know they are probably delicious, but that's hardly the most important thing about them. The most significant fact is that these are peak portable caffeine machines. As a soccer and swim mom, I frequently have to not only be awake, but awake, mobile, and coherent at 6 a.m.. Yes, you read that right — my daughter's love of sport requires me to interact with other human beings before most people have even hit the snooze button. I have to be on the sidelines or in the stands, watching, cheering, and generally being perky at an hour when I'd rather be alone.

These cans of caffeine and caramel can be thrown in the fridge the night before, ready to keep my mind sharp and my body moving at "why did I agree to this?" o'clock. Not only that, but on days where it's my turn to bring the coffee for the other parents who are questioning whatever life choices brought them to a soccer pitch before sunrise, I can just fill a cooler with these and call it a freaking day. I might even mix it up and throw in a few of the dairy versions, as well. (Even though I live in Brooklyn, and pretty much everyone drinks non-dairy coffee, even if they aren't vegan.)

Will it be hard to share my Trader Joe's cold brew coconut cream lattes with the group? You bet your sweet butt it will be, but for the greater good, and for the sake of our children, I will make this sacrifice. Grudgingly, and with much hesitation. I might even whimper.

For 9 ounces of creamy latte, there are only 110 calories. On really hot days, these would be the ideal base for latte ice pops, thanks to their lower sugar content and creamy base. Just pour it into your favorite popsicle mold, freeze, and you have what can only be described as the perfect, perky, freeze pop. Head to TJ's and get on this, because like most things at Trader Joe's, they're probably going to disappear from the shelves quickly.