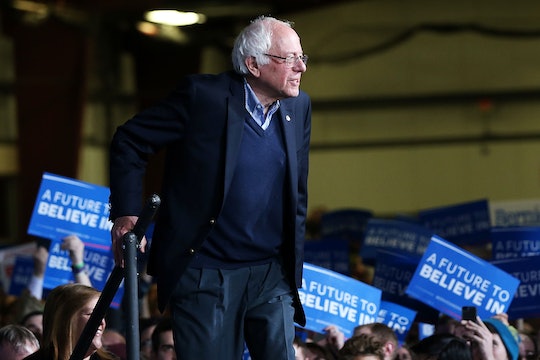 Sometimes a candidate can do everything right and the odds just aren't in their favor. Such was the case on Tuesday night when, after a hard-fought election battle, Vermont Sen. Bernie Sanders seemed to concede the overall victory to rival Democrat, former Secretary of State Hillary Clinton early, barely waiting until the first few states were in to address his supporters. True to character, of course, Sanders's Super Tuesday speech was moving as ever, encouraging voters to keep pushing forward in the hopes that subsequent elections might prove more fruitful.

More Like This
If Your Kid Can’t Get Enough Dinosaurs, They’ll Love These 20 Shows
Naomi Campbell Reveals She’s A First-Time Mom
Meghan Markle's "Raising The Future" T-Shirt Has A Cute Connection To Archie
15 Of JAY-Z’s Best Quotes On Parenting

"Thank you, thank you," said Sanders, amidst a wave of "Feel the Bern" cheers. "This campaign—as I think all of you know—this campaign is not just about electing a president, it is about transforming America. It is about making our great country the nation that it has the potential to be."

Naturally, Sanders handled it all with ease, even taking the time to crack a few jokes with supporters early in the day, according to Politico. "I will tell you after a lot of thought, I voted for me for president," Sanders quipped, taking a selfie with a supporter in Burlington, Vermont, where he and wife Jane had just cast their ballots.

To Vermont voters, who overwhelmingly voted for Sanders in what was projected to be a landslide victory, Sanders delivered a few especially touching words at a campaign rally early in the night. "On a personal note, I want to thank all of you for the love and the friendship that you have given our family," Sanders told a crowd in Essex Junction. "You have sustained me."

Sanders' words on Tuesday, though curiously timed, were especially encouraging to voters who felt the media had already dismissed the Vermont senator's progress — and considering that those same, grassroots supporters are the ones who have propelled him this far, it was a smart move.

Read the full transcript of Sanders' statements below:

Thank you! Thank you.

You know, I have been all over this country, but the truth is, it is great to come home. You know, we wanna win in every part of the country. That goes without saying. But it does say something and means so much to me that the people who know me best, the people who knew me before I was elected, who knew me as mayor, who knew me as a congressman and know me as senator, have voted so strongly to put us in the White House. Thank you so much.

This campaign—as I think all of you know—this campaign is not just about electing a president, it is about transforming America. It is about making our great country the nation that it has the potential to be. It is about dealing with some unpleasant truths that exist in America today, and having the guts to confront those truths.

It is about recognizing that in our state, we have town meetings — and people come out and they argue about budgets, and then they vote. One person, one vote. In Vermont, billionaires do not buy town meetings. And in America, we are gonna end a corrupt campaign finance system.

We can disagree in a democracy—and that's what a democracy is about—but I hope that all of us agree that we're not gonna allow billionaires and their super PACs to destroy American democracy.

In our state, you all know that we have many, many thousands of Vermonters who are working not just one job, they're working two jobs, they're working three jobs. And you all know, that while our people are working so hard, almost all the new wealth and income generated in America is going to the top 1 percent. Well, together, what we are going to do is create an economy that works for all of us, not just the people on top. And together, we are going to end and reform a broken criminal justice system.

This country, the wealthiest country in the history of the world, should not be having more people in jail than any other country on Earth. That's wrong. So we are going to invest for our young people in education and jobs — not jails or incarceration.

Now, I know many of my Republican colleagues think that climate change is a hoax. Well, I believe that you don't develop real public policy unless you listen to the science. And the science is clear. Together, we are going to transform our energy system away from fossil fuel to energy efficiency and sustainability.

Now, I know that Secretary Clinton and the establishment people think that I am looking and thinking too big. I don't think so. So let me go on the record and say, as you have heard me say for years: Healthcare is a right for all people. And let me also say that in the United States of America, when we talk about public education, it's not just first grade through 12th, that has got to be expanded to make public colleges and universities tuition-free.

What I have said from day one in this campaign—and I suspect many of you were out with me on the lake when we announced on that beautiful day—what I have said is that this campaign is not just about electing a president, it is about making political revolution. And what that revolution is about is bringing millions and millions of people into the political process. Working people who have been so disillusioned, they no longer vote. Young people who have never been involved. What the political revolution is about is bringing our people together — black and white, Latino, Asian-American. Gay and straight. People born in America. People who have immigrated to America.

Tonight, you're gonna see a lot of election results come in. And let me remind you of what the media often forgets about: This is not a general election. It's not winner-take-all. If you get 52 percent, you get 48 percent, you roughly end up with the same amount of delegates in a state. By the end of tonight, we are going to win many hundreds of delegates.

Ten months ago, as you know better than any other group in America, when we were out on that lake, we were at 3 percent in the polls. We have come a very long way in 10 months.

At the end of tonight, 15 states will have voted. Thirty-five states remain. And let me assure you that we are going to take our fight for economic justice, for social justice, for environmental sanity, for a world of peace to every one of those states.

So on a personal note, I want to thank all of you for the love and the friendship that you have given our family. You have sustained me. And I am so proud to bring Vermont values all across this country. So thank you, again, for helping us win here in Vermont tonight, and I look forward this evening to saying hello to so many old friends. Thank you so much.