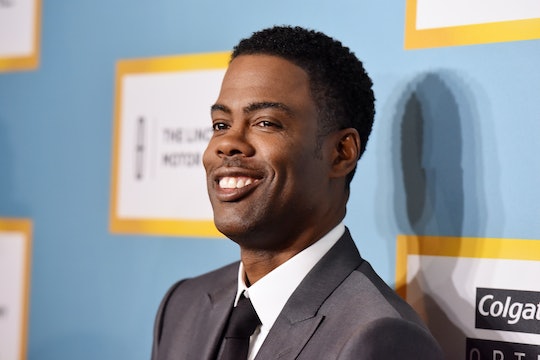 Oscars host Chris Rock had to meet seriously high expectations for the 88th Academy Awards. For the second year in a row, there were no black actors nominated in any of the major acting categories. As a result, the Internet was really looking forward to Rock roasting the Oscars during his monologue. Transcript of Chris Rock's Oscars monologue shows that he really lived up to everyone's expectations.

Though some people called for Rock to boycott the Oscars along with some other actors of color, Oscar producer Reginald Hudlin told Entertainment Weekly that Rock was not going to quit. Instead, he said that Rock and his writers "locked themselves in a room. As things got a little provocative and exciting, he said, ‘I’m throwing out the show I wrote and writing a new show.'" So, Rock definitely wanted to address the #OscarsSoWhite controversy, and Hudlin said that the Academy was ready for him to do just that, according to EW:

And, the New York Times transcript of Rock's monologue shows that he didn't let anyone down. Rock did not ignore the white-washing in this year's Oscars, and the Internet was pleased:

Man, I counted at least 15 black people on that monitor. I’m here at the Academy Awards, otherwise known as the White People’s Choice Awards. You realize if they nominated hosts, I wouldn’t even get this job. So y’all would be watching Neil Patrick Harris right now.

But this is the wildest, craziest Oscars to ever host, because we’ve got all this controversy. No, no black nominees, you know, and people are like “Chris, you should boycott. Chris, you should quit. You should quit.” How come there’s only unemployed people that tell you to quit something, you know? No one with a job ever tells you to quit. So, I thought about quitting. I thought about it real hard. But, I realized, they’re gonna have the Oscars anyway. They’re not gonna cancel the Oscars because I quit. You know? And the last thing I need is to lose another job to Kevin Hart, O.K.? I don’t need that. Kev right there — Kev makes movies fast. Every month. Porno stars don’t make movies that fast.

Now the thing is, Why are we protesting? The big question: Why this Oscars? Why this Oscars, you know? It’s the 88th Academy Awards. It’s the 88th Academy Awards, which means this whole no black nominees thing has happened at least 71 other times. OK? You gotta figure that it happened in the '50s, in the '60s — you know, in the '60s, one of those years Sidney [Poitier] didn’t put out a movie. I’m sure there were no black nominees some of those years. Say ‘62 or ‘63, and black people did not protest.

But what happened this year? What happened? People went mad. Spike got mad, — got mad, and Jada went mad, and Will went mad. Everybody went mad, you know? Jada got mad? Jada says she not coming, protesting. I’m like ain’t she on a TV show? Jada is going to boycott the Oscars — Jada boycotting the Oscars is like me boycotting Rihanna’s panties. I wasn’t invited. Oh, that’s not an invitation I would turn down. But I understand, I’m not hating. I understand you mad. Jada’s mad her man Will was not nominated for Concussion. I get it, I get it. Tell the truth. I get it, I get it. You get mad — it’s not fair that Will was this good and didn’t get nominated. Yeah, you’re right. It’s also not fair that Will was paid $20 million for Wild Wild West. OK?

Yes, yes. I said it. Alright? Hey, if you want black nominees every year, you need to just have black categories. That’s what you need. You need to have black categories. You already do it with men and women. Think about it: There’s no real reason for there to be a man and a woman category in acting. C’mon. There’s no reason. It’s not track and field. You don’t have to separate ‘em. You know, Robert De Niro’s never said, “I better slow this acting down, so Meryl Streep can catch up.” No, not at all, man. If you want black people every year at the Oscars, just have black categories like Best Black Friend. That’s right. “And the winner for the 18th year in a row is Wanda Sykes. This is Wanda’s 18th Black Oscar.”

But here’s the real question. The real question everybody wants to know, everybody wants to know in the world is: Is Hollywood racist? Is Hollywood racist? You know, that’s a...you gotta go at that at the right way. Is it burning-cross racist? No. Is it fetch-me-some-lemonade racist? No. No, no, no. It’s a different type of racist.

Now, I remember one night I was at a fund-raiser for President Obama. A lot of you were there. And, you know, it’s me and all of Hollywood. And it’s all of us there. And it’s about four black people there: me, uh, let’s see, Quincy Jones, Russell Simmons, Questlove. You know, the usual suspects, right? And every black actor that wasn’t working. Needless, to say Kev Hart was not there. OK? So, at some point you get to take a picture with the president, and, you know as they’re setting up the picture you get a little moment with the president. I’m like, “Mr. President, you see all these writers and producers and actors? They don’t hire black people, and they’re the nicest, white people on earth! They’re liberals! Cheese!”

That’s right. Is Hollywood racist? You’re damn right Hollywood is racist. But it ain’t that racist that you’ve grown accustomed to. Hollywood is sorority racist. It’s like, “We like you Rhonda, but you’re not a Kappa.” That’s how Hollywood is.

But things are changing. Things are changing. We got a black Rocky this year. Some people call it Creed. I call it “Black Rocky.” And that’s a big, that’s an unbelievable statement. I mean, cause Rocky takes place in a world where white athletes are as good as black athletes. Rocky is a science fiction movie. There’s things that happened in Star Wars that are more believable than things that happened in Rocky, OK?

Now, that’s range. Ben Affleck can’t do that. What I’m trying to say is, you know, it’s not about boycotting anything. It’s just, we want opportunity. We want black actors to get the same opportunities as white actors.

That’s it. Not just once. Leo gets a great part every year and, you know, everybody, all you guys, get great parts all the time. But what about the black actors? Look at Jamie Foxx. Jamie Foxx is one of the best actors in the world, man. Jamie Foxx was so good in Ray that they went to the hospital and unplugged the real Ray Charles. It’s like, “We don’t need two of these!” Nah, man.

You know, if George Clooney showed up with a lime green tux on, and a swan coming out his ass, somebody would go, “What you wearing, George?”

Hey, welcome to the 88th Oscars, Academy Awards. Yes, thank you. You want diversity? We got diversity. Please welcome Emily Blunt and somebody whiter, Charlize Theron.

Rock blatantly called out the real problem with diversity in Hollywood: it's a problem that goes way beyond the Oscars, and it will only change when people start seeing black actors as people who can perform roles just as well as someone like Leonardo DiCaprio.