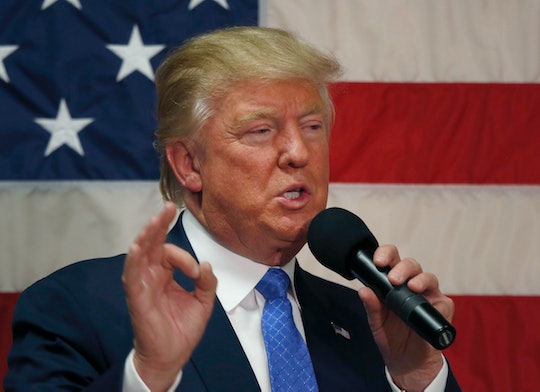 Donald Trump has had a rough couple of weeks. Since the Republican candidate last faced Hillary Clinton on the debate stage, he has weathered multiple scandals, been deserted by fellow party members, and faced calls to resign as the nominee. Going into the second debate Sunday night, many were wondering how he would respond to the increasing backlash against him. A transcript of Donald Trump's opening statement at the second presidential debate showed that he was uncomfortably out of place, if nothing else.

More Like This
If Your Kid Can’t Get Enough Dinosaurs, They’ll Love These 20 Shows
Naomi Campbell Reveals She’s A First-Time Mom
Meghan Markle's "Raising The Future" T-Shirt Has A Cute Connection To Archie
Obama Said The Sweetest Thing About His “Friend” & Family Dog Bo

Trump's recent troubles began when the New York Times published pages of the tax returns he'd been refusing to release. The returns appeared to show that he claimed a $916 million loss in 1995, which may have allowed him to avoid paying federal income taxes for up to 18 years. (As he said in the first debate, that makes him "smart.")

But Trump's chances of making history as the first-ever reality star to attain the presidency seemed to recede even further when a tape surfaced over the weekend of him making lewd remarks about women, and bragging about what amounts to alleged sexual assault. Although Republican leaders across the nation disavowed him, with many calling for him to allow his running mate, Mike Pence, to run in his stead, Trump went into the second debate vowing that he would see the race through. But his opening statement did not necessarily do much to right his sinking ship.

A full transcript of Trump's statements can be found below.

When asked by an audience member about whether he and Clinton were modeling appropriate behavior for today's youth, Clinton spoke first, saying that she wanted to "heal our country and bring it together." After her statement, Trump spoke for the first time in the debate, saying:

Well, I actually agree with that. I agree with everything she said. I began this campaign because I was so tired of seeing such foolish things happen to our country. This is a great country. A great land. I've gotten to know the people of the country over the last year and a half that I've been doing this as a politician. I cannot believe I'm saying that about myself, but I guess I have been a politician and my whole concept was to make America great again. When I watch the Iran deal being made, some horrible things like Obamacare, health insurance and health care is going up, my numbers that are astronomical, 68 percent, 71 percent, when I look at the Iran deal and how bad a deal it is for us. It's a one sided transaction. Where we're giving back $150 billion to a terrorist state — really the number one terror state — we've made them a strong country from really a very weak country from just three years ago.

When I look at all of the things that I see in all of the potential that our country has, we have such tremendous potential. Whether it's in business and trade, where we're doing so badly. Last year, we had almost $800 billion trade deficit. Other words, trading with other countries. We had an $800 billion deficit. It's hard to believe.

Inconceivable. We're going to make great deals. Have a strong border. I'm going to bring back law and order. Just today, a policemen was shot. Two killed. And this is happening on a weekly basis. We have to bring back respect to law enforcement. At the same time, we need to take care of people on both sides. We need justice. But I want to do things that haven't been done, including fixing and making inner cities better for African-American citizens and for the Latinos, hispanics, and I look forward to doing that to make America great again.

All in all, Trump's first statement hit many of the same notes as his remarks in the first debate. And given that much of America thought he lost the first debate, it wasn't necessarily a smart route to revisit.