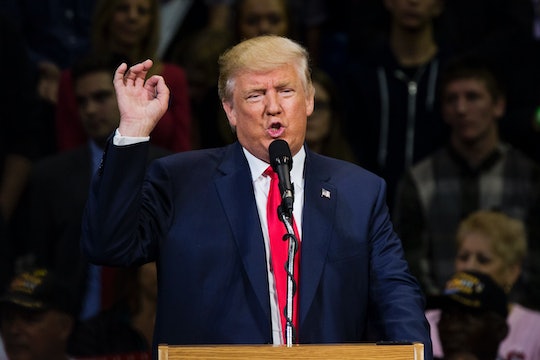 Facing an avalanche of new sexual assault allegations from a variety of women, GOP presidential nominee Donald Trump used a campaign rally in Florida to address the accusations. He followed a blistering speech from First Lady Michelle Obama where she called his recent language unearthed in a 2005 Access Hollywood tape "intolerable." Here's a transcript of Donald Trump's speech in West Palm Beach, Florida.

Trump showed up ready to lash out at one of his favorite targets: the media. Trump also referenced a lawsuit he promised to file against the New York Times for printing the accusations of women who came forward this week to say Trump had made inappropriate advances on them. According to a response from the Times, the paper says they'll be happy to see him in court. He claimed the media is reporting the allegations as a way to hurt his chances in the election.

Thank you folks, it's great to be right here in Florida which we love. In 26 days we are going to win this great, great state and we are going to win the White House. Our movement is about replacing a failed, and corrupt, and when I say corrupt I'm talking about totally corrupt, political establishment with a new government controlled by you the American people.

He then quickly launched into his attack on the media.

There is nothing the political establishment will not do. No lie they won't tell, to hold their prestige and power at your expense, and that's what's been happening. The Washington establishment and the financial and media corporations that fund it, exist for only one reason, to protect and enrich itself. The establishment has trillions of dollars at stake in this election. As an example, just one single trade deal they'd like to pass involves trillions of dollars controlled by many countries, corporations, and lobbyists.

He then went on his usual riff about trade policies and how American workers are being left behind by the establishment.

"The Clinton Machine is at the center of this power structure," Trump said. He accused his opponent, former Secretary of state Hillary Clinton, of meeting with banks in secret to plot against the American economy. The statement was met with a roar of the common Trump rally cry "Lock her up!"

Honestly, she should be locked up. Should be locked up. And likewise the emails show that the Clinton machine is co closely and irrevocably ties to the media organization that she, listen to this, is given the questions and answers in advance of her debate performance with Bernie Sanders. Hillary Clinton is also given approval and veto power over quotes written about her in the New York Times. And the emails show the reporters conspire and collaborate with helping her win the election.

He went on to denounce what he called the "corporate media." Then he launched into a defense against the allegations from women saying Trump has sexually assaulted or made inappropriate advances on them. Trump's campaign has not responded to Romper's multiple requests for comment.

These vicious claims about me, of inappropriate conduct with women, are totally and absolutely false. And the Clintons know it. And they know it very well. These claims are all fabricated. They're pure fiction and they're outright lies. These events never, ever happened, and the people that said them meekly fully understand — you take a look at these people, you study these people, and you'll fully understand also. The claims are preposterous, ludicrous, and defy common sense and logic. We already have substantial evidence to dispute these lies and it will be made public in an appropriate way and at an appropriate time very soon. These lies come from outlets whose past stories and past claims have already been discredited. The media outlets did not attempt to confirm the most basic facts, because even a simple investigation would've shown that these were nothing more than false smears.

He accused the media of ginning up the stories as a way to rig the election for Hillary Clinton.

Here's video uploaded to YouTube that reportedly shows the press being thrown out of a Trump meeting with business people for asking about the sexual misconduct allegations.

Then he made the case for his own election touting his success and "mindset."

I will not lie to you, these false attacks are absolutely hurtful. To be lied about to be slandered to be smeared so publicly and before a family that you love is very painful. What is going on is egregious beyond any words. People that know the story, people that see the story, people that know the facts, they can't even believe it. It's reprehensible beyond description. It's totally corrupt. But I also know it's not about me, it's about all of you and it's about our country. I know that, I fully understand, it's why I got involved. It's about all of us together as a country.

He then made his pitch to Hispanic and African-American communities with his "What the hell do you have to lose?" line. Trump concluded with a line that sounds like it's from the movie Independence Day.

Our independence day is at hand, and it arrives finally on November 8th. Join me in taking back our country and creating a bright, glorious and prosperous new future for our people and we will make America great again and it will happen quickly. God bless you. Thank you.