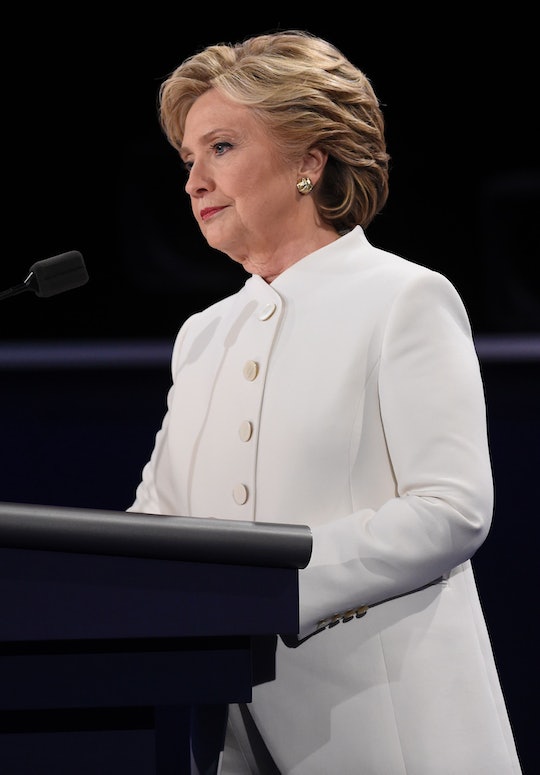 We suffered plenty of dark, cringe-worthy moments in the second presidential debate surrounding the bombshell Access Hollywood tape that left Donald Trump defending allegations of sexual assault. But moderator Chris Wallace brought it up again one more time. The transcript of Hillary Clinton's response to Trump's denying sexual assault in the final presidential debate is stunning, and it was just as beautifully executed aloud.

Even though Trump interrupted her mid-speech to bark, "Wrong," when she brought up that he also mimicked a disabled reporter at a rally to the cheers of his supporters, Clinton soldiered on, and delivered an eviscerating (and deeply satisfying) laundry list of Trump's most egregiously offensive actions. She tackled not only his dismissal of the women who accused him of sexual misconduct, but also his ableist mockery, his Islamophobic attack of a gold star family, his disrespect of a prisoner of war and the former presidential nominee of his party, and his racist attack on a federal judge.

You can read a full transcript of her remarks here:

"Every time Donald is pushed on something which is obviously uncomfortable, like what these women are saying, he immediately goes to denying responsibility, and it's not just about women. He never apologizes or says he's sorry for anything. So we know he has said and what he has done to women.

But he also went after a disabled reporter, mocked and mimicked him on national television. He went after Mr. and Mrs. Khan, the parents of a young man who died serving our country, a gold star family, because of their religion. He went after John McCain, a prisoner of war, said he prefers people who aren't captured. He went after a federal judge, born in Indiana, but who Donald said couldn't be trusted to try the fraud and racketeering case against Trump University because his parents were Mexican.

So it's not one thing; this is a pattern. A pattern of divisiveness, of a very dark and, in many ways, dangerous vision of our country, where he incites violence, where he applauds people who are pushing and pulling and punching at his rallies. That is not who America is, and I hope that, as we move in the last weeks of this campaign, more and more people will understand what's at stake in this election. It really does come down to what kind of country we are going to have."

Clinton challenged her audience to consider Trump's violent rallies, and his part in orchestrating violence, as a yardstick against which to measure how he'd handle being Commander in Chief. Ultimately, it was the perfect excuse to enumerate Trump's many horrifying campaign moments and tie it up with an analysis of his potential as a leader.