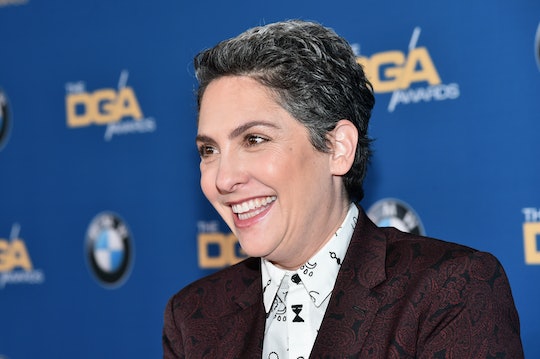 When Jill Soloway won for Directing a Comedy Series for Transparent during the 2016 Emmys Sunday night, she had some incredibly profound things to say. It's clearly a show that means a great deal to her, and this transcript of Jill Soloway's 2016 Emmys Acceptance speech proves just how important diverse storytelling can be. It was her second win and ninth nomination; her previous win was for Transparent, too.

Wow, um. People asked me if it's hard to be a director and I tell them, 'No, life is very hard, being a good partner, being a good mother, being a good person is hard – being a director is so [bleeped] easy?' I just get to make my dreams come true. It's a privilege and it also creates privilege. When you take women, people of color, trans people, queer people, and you put them at the center of the story, the subjects instead of the objects, you change the world, we found out. We found out! Um, so I want to thank you, my sweet Jeff Bezos, because you changed the world, and you invited me to do this thing that these people call television, but I call a revolution. I always wanted to be part of a movement – the civil rights movement, the feminist movement – this TV show allows me to take my dreams about unlikeable Jewish people, queer folk, trans folk, and make them the heroes. Thank you to the trans community for your lived lives. We need to stop violence against transgender woman and topple the patriarchy! Topple the patriarchy!

Soloway's speech was undeniably important for a few different reasons. It was incredible to see her win such a prestigious award for something she was (and is) so proud of, but it also allowed her to highlight one of the best things about television: not every show gets it right, but when they do, TV can really give voice and representation to people who aren't always highlighted (or are even outwardly and purposefully ignored). The fact that Soloway made sure to honor transgender people with her award – as well as call attention to the high rate of violence against trans women – shows that she is dedicated to making that representation happen and the change that's sure to follow.

Representation has come up again and again during the 2016 Emmys. People behind the media we consume have to become more aware of just how much audiences need to see themselves represented on screen; telling all kinds of stories is of utmost importance because the world is made up of all kinds of people. In fact, Transparent actor Jeffrey Tambor continued Soloway's message during his own acceptance speech, stating that he wouldn't be sad if he was the last cisgender male to play a transgender woman on screen. The time has come for those who are underepresented to not only be represented, but to be given the opportunity to represent themsevels. Having Jill Soloway address that in her acceptance speech (and having Tambor follow in her footsteps) proves she's aware of that, too.