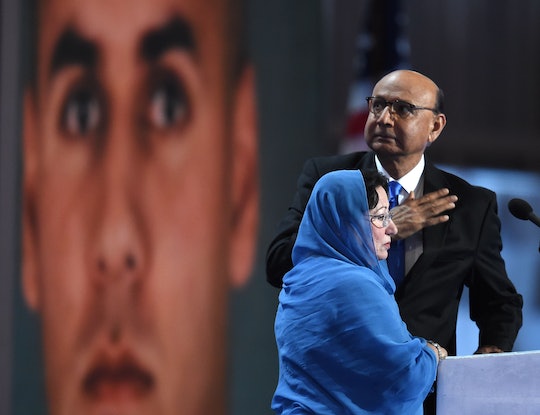 In June 2004, Khizr Khan buried his son. In July 2004, then-Apprentice star Donald Trump began speaking out against the war in Iraq. Over a decade later, the paths of these two men would intersect on the DNC stage when Khan called for all Americans to vote for Democratic presidential nominee Hillary Clinton over Trump, a man who "sacrificed nothing and no one." The transcript of Khizr Khan's speech illustrates the dangers of Trump's positions on Muslims and immigration.

In the summer of 2004, Esquire featured Trump on the cover of their August issue. The businessman was perfecting the art of firing people on The Apprentice; he was also leaning in to the national conversation on the war in Iraq. During his Esquire interview, Trump shared his thoughts on the conflict:

My life is seeing everything in terms of 'How would I handle that?' Look at the war in Iraq and the mess that we're in. I would never have handled it that way. Does anybody really believe that Iraq is going to be a wonderful democracy where people are going to run down to the voting box and gently put in their ballot and the winner is happily going to step up to lead the county? C'mon. Two minutes after we leave, there's going to be a revolution, and the meanest, toughest, smartest, most vicious guy will take over. And he'll have weapons of mass destruction, which Saddam didn't have. What was the purpose of this whole thing? Hundreds and hundreds of young people killed. And what about the people coming back with no arms and legs? Not to mention the other side. All those Iraqi kids who've been blown to pieces. And it turns out that all of the reasons for the war were blatantly wrong. All this for nothing!

Capt. Humayun Khan was one of the people killed that year, and his father believes his sacrifice certainly meant something. Humayun was only 27 years old when he served in Baquba, Iraq, Slate reported. He noticed a suspicious vehicle nearing his camp and asked soldiers nearby to get down; he approached the vehicle, not knowing that a pair of suicide bombers waited inside. After only 10 steps, Humayun died when the vehicle exploded. Humayun likely saved everyone at the camp, earning "the Bronze Star and the Purple Heart" for his courage, according to Slate.

Twelve years later, Trump touts the wisdom he had in condemning the war in Iraq (though Trump's original position on Iraq in still debated). He's also remained true to his mantra from the 2004 Esquire interview—"How would I handle that?" — as a presidential candidate; Politico reported that Trump said he is his own "number one" consultant on foreign policy. It may explain why elements of Trump's approach to foreign policy deeply concern Americans, particularly a proposed ban on Muslim immigration. Early in his primary campaign, Trump supported preventing Muslims from entering the United States, according to CNN; he viewed it as an anti-terror strategy. In June 2016, Trump revised his position. Campaign spokeswoman Hope Hicks said Trump would focus on keeping individuals "from 'terror states'" out of the country, while Trump himself suggested he might still admit Muslims if they underwent a strong vetting process.

What many have been perceived as a softening of Trump's position did little to soften the hearts of Americans concerned for the safety and respect of the international Muslim community. One man who shared that concern was Khan, a father who recognizes the implications of Trump's platform for all Muslims and all immigrants. Khan moved to the United States with his wife in the 1970s, according to a 2005 interview with The Washington Post. They traveled from Pakistan to Silver Spring, Maryland and had three boys. The future Capt. Khan grew up as a fan of Thomas Jefferson and attended the Founding Father's University of Virginia; he joined the ROTC, then the Army. Khan told The Washington Post that his son felt called to Iraq: "He wasn't going there through some thoughtless process, or thoughtlessly following orders. He thought he was serving a purpose."

This month, Khan left his home in Charlottesville, Virginia to attend the Democratic National Convention in Philadelphia, Pennsylvania. With his wife at his side, he delivered a powerful speech condemning Trump's disrespectful rhetoric and dehumanizing approach to immigration. Speaking of his son, Khan said, "If it was up to Donald Trump, he never would have been in America." Khan ended his speech by asking voters to stand with Clinton, because "We are Stronger Together."

Here is the full transcript of the speech:

Tonight, we are honored to stand here as the parents of Capt. Humayun Khan, and as patriotic American Muslims with undivided loyalty to our country.

Like many immigrants, we came to this country empty-handed. We believed in American democracy — that with hard work and the goodness of this country, we could share in and contribute to its blessings.

We were blessed to raise our three sons in a nation where they were free to be themselves and follow their dreams.

Our son, Humayun, had dreams of being a military lawyer. But he put those dreams aside the day he sacrificed his life to save his fellow soldiers.

Hillary Clinton was right when she called my son "the best of America."

If it was up to Donald Trump, he never would have been in America.

Donald Trump consistently smears the character of Muslims. He disrespects other minorities, women, judges, even his own party leadership. He vows to build walls and ban us from this country.

Donald Trump, you are asking Americans to trust you with our future. Let me ask you: Have you even read the U.S. Constitution? I will gladly lend you my copy. In this document, look for the words "liberty" and "equal protection of law."

You have sacrificed nothing and no one.

We can't solve our problems by building walls and sowing division.

We are Stronger Together.

And we will keep getting stronger when Hillary Clinton becomes our next President.

On Thursday, Trump said speeches at the DNC condemning his candidacy angered him; according to CNN, he said he'd like to "hit a number of those speakers so hard, their heads would spin." Hopefully, Khan's speech is one Trump will actually take to heart.