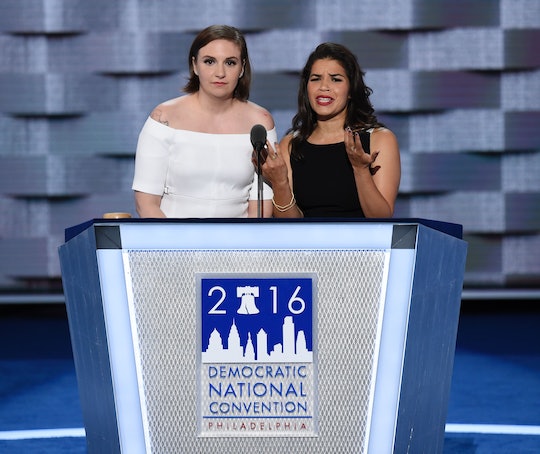 It was about time millennials' voices were heard at the Democratic National Convention stage. After a turbulent start to the most important event for the Democratic Party this election season, actresses Lena Dunham and America Ferrera took the microphone to voice their support for Hillary Clinton. Democrats began the convention week a party divided, with perhaps more boos shouted at Clinton than were heard at the Republican Convention, a week earlier. The transcript of Lena Dunham and America Ferrera's speech show why Clinton is indeed a millennial candidate.

Dunham and Ferrera were welcome voices at a convention mired in controversy. Several of Vermont Sen. Bernie Sanders' supporters, seething from revelations last week that some staffers of the DNC sought to undermine his campaign, did not hold back on Monday night. At times, speakers could not be heard over the crowd's chants of "Bernie, Bernie!" Some guests, like comedian Sarah Silverman, tried to convince the crowd that Sanders supporters should now unite behind Clinton. But it was no use. The booing continued throughout the night, revealing the hold Sanders still has on his supporters, many of whom are under 35.

However, as Ferrera and Dunham's (unsurprisingly funny) speech tonight made clear, Clinton is a millennial's candidate too.

A full transcript of Dunham and Ferrera's remarks can be found below:

Lena Dunham: I'm Lena Dunham, and according to Donald Trump, my body is probably like, a two.

LD: But America, you’re not Mexican?

LD: We know what you’re all thinking. Why should you care what some television celebrity has to say about politics?

AF: And we feel the same way, but he is the republican nominee, so we need to talk about it.

LD: The non-funny fact, is that this man will have us believe that our differences are more important than what unites us.

AF: When we know that the truth is that this country was founded on the belief that what sets us apart, race, language, religion, sexual orientation, should not dissolve what binds us.

LD: Which is why, we are proud to say:

Both: We’re with Hillary.

AF: I am the proud child of Honduran immigrants. I am profoundly grateful for the access and opportunity that exists in this extraordinary nation. I was educated in public schools, my talents were nurtured through public arts programs, and you know what, occasionally I needed a free meal to get through the school day. Not everybody looks at the millions of young people like me — children born into struggling families, children born to immigrant parents, children who are immigrants themselves — not everybody looks at them and sees them as an investment. But Hillary has spent the last 30 years proving what she sees in us. Not our color, gender, economic status, but our capacity to grow into thriving adults, capable of contributing great things to this country.

LD: I am a pro-choice, feminist, sexual assault survivor with a chronic reproductive illness. Donald Trump and his party think I should be punished for exercising my constitutional rights. His rhetoric about women takes us back to a time when we were meant to be beautiful and silent. Meanwhile 22 years ago, Hillary Clinton declared that women’s rights are human rights. And she made it possible for my fellow sexual assault survivors in my home state of New York to have access to safe, immediate care in any emergency room. Hillary Knows that access and opportunity are the American promise. Not transphobia, Islamophobia, xenophobia, and systemic racism. She knows we have to fight hatred of all kinds and not ignite it for the craven purpose of seeking power.

AF: Look; Donald is not making America great again. He’s making America hate again. And the vast majority of us, we cannot afford to see his vision of America come to be.

LD: Luckily we, the voters, carry the future of this country. We don’t accept hatred as the norm in our communities, so why would we ever accept it in the Oval Office.

AF: So to everyone here tonight, and out there watching at home, here is your chance to join team Hillary.

LD: Do you want equal pay for equal work?

LD: The right to make decisions about your own body?

LD: As Hillary Clinton says, Deal us in!

AF: Text deal “DEAL” to 47246 and we will make you a card-carrying member of this team. Let’s forcefully reject division.

LD: Let’s say with one voice that we all have worth; we are all a part of this country.

Check out a video of Ferrera and Dunham's speech below and get inspired, millennials: