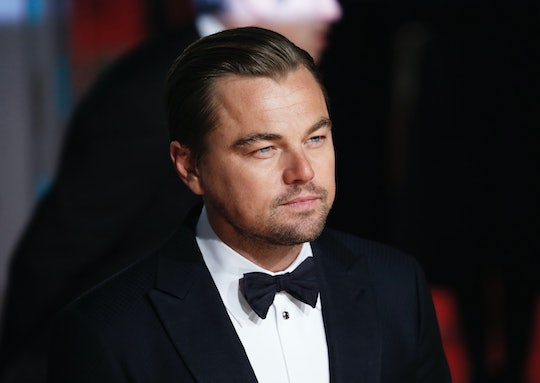 It finally happened. The 88th Academy Awards on Sunday night finally saw an event that the world has been waiting years for: Leonardo DiCaprio finally won an Oscar for his performance in The Revenant. Transcript of DiCaprio's Oscars acceptance speech shows that he was just has ready to bring home that shiny, well-deserved trophy as the rest of the Internet was for him. No more sad Leo memes; no more disappointed GIFs.

More Like This
Fries, Beer, & More Free Stuff You Can Get If You’re Vaccinated
Here Are The Best Kids' Shows On Hulu To Enjoy As A Family
Say Everything You've Always Wanted To Say With These 13 Father's Day Poems
Check Out The Cutest Baby Swimsuits From Old Navy, Hanna Andersson, & More

Many believed DiCaprio was snubbed in 2014 when he didn't win an Oscar for his performance in The Wolf of Wall Street, and in 2007 for Blood Diamond, and in 2004 for The Aviator — you get the picture. Even Adele wished DiCaprio luck on Sunday morning before the awards — and she did it with the most epic Titanic joke ever, according to People:

Everyone loves you because you're the best. Meet me at the clock anytime bruv X.

Brilliant. But to top it all off, she even included a picture of her standing in front of the clock that Jack asks Rose to meet him at in Titanic. And all of Leo's hard work was finally recognized on Sunday night when he won the Oscar for his performance as Huge Glass in The Revenant. Transcript of his acceptance speech shows that DiCaprio wasn't just going to use the moment to gloat about how long he's waited for the moment. Nope, true to Leo form, he used the platform to share what The Revenant was really about: the planet and combating manmade climate change:

Thank you all so very much. Thank you to The Academy. I have to congratulate the other incredible nominees in this room for their unbelievable performances.

The Revenant was the product of an unbelievable cast and crew I got to work alongside. First off, to my brother in this endeavor, Mr. Tom Hardy. Tom, your fierice talent on screen can only be surpassed off screen by Mr. Alejandro Inarritu. As the history of cinema unfolds, you have forged your way into history this past two years. What an unbelievable talent you are.

Thank you to you and [Emmanuel] Chivo [Lubezki] for creating a transcendent cinematic experience for all of us.

Thank you to everyone at Fox and Regency. Ana Melching, you were the champion of this endeavor.

I have to thank everyone from the very onset of my career — Mr. [Unclear name] Jones for casting me in my first film. Mr. Scorsese for teaching me so much about the cinematic art form. To Mr. Rick Yorn, thank you for helping me navigate this industry. And, to my parents, none of this would be possible without you, and, to my friends, I love you dearly, you know who you are.

And lastly, I just want to say this, making The Revenant was about man's relationship to the natural world — the world that we collectively felt in 2015 as the hottest year in recorded history. Our production had to move to the southernmost tip of this planet just to be able to find snow. Climate change is real, it is happening right now, it is the most urgent threat facing our entire species, and we need to work collectively together and stop procrastinating.

We need to support leaders around the world who do not speak for the big polluters or the big corporations, but who speak for all of humanity, for the indigenous peoples of the world, for the billions and billions of underprivileged people who will be most affected by this, for our children's children, and for those people out there whose voices have been drowned out by the politics of greed.

The fact that DiCaprio used his speech as more than a time to say "I won, finally! Thanks!" shows that he truly cares about the issues behind the films that he stars in. DiCaprio's important call to action shows just why he deserved this Oscar.