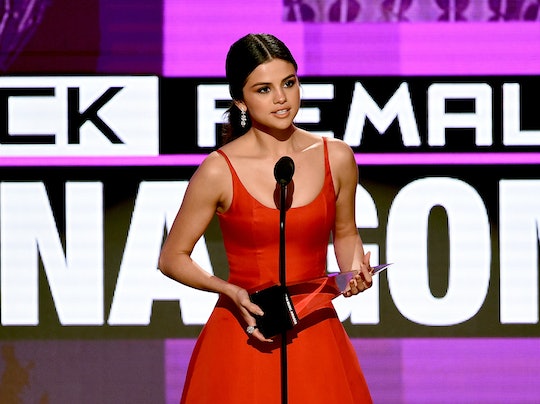 Selena Gomez accepted the award for Favorite Pop/Rock Female Artist at the 2016 American Music Awards, and considering it was her first public appearance since a stint in a treatment center earlier this year, we were virtually guaranteed an emotional speech. But the transcript of Selena Gomez's AMAs acceptance speech blew away everyone's expectations.

Gomez has taken breaks from the public eye before, spending her first stint in treatment in 2014, following a lupus diagnosis. The autoimmune disease, which at one point she was treating with chemotherapy, is associated with the anxiety, panic attacks, and depression from which Gomez suffers. With the debut of Revival, her wildly successful sophomore album in 2015, Gomez was able to revamp her image and navigate successfully away from her squeaky clean Disney past. The album explores sexual themes, but in an extremely mature way, markedly subtler than the sexual awakenings of some of her other Disney compatriots. (Not that there's any wrong way to do a sexual awakening.)

But after the end of her American tour of that album, she canceled the international legs and went back into treatment this past August. The 2016 AMAs were her first public appearance since getting out.

Said Gomez in her acceptance speech:

"Thank you guys so much. In 2014, this stage was actually the first time that I was authentically, 100 percent honest with all of you. I think it's safe to say that most of you know a lot of my life, whether I liked it or not, and I had to stop. 'Cause I had everything and I was absolutely broken inside. And I kept it all together enough to where I would never let you down. But I kept it too much together to where I let myself down. I don't want to see your bodies on Instagram. I want to see what's in here [gestures to heart]. I'm not trying to get validation, nor do I need it anymore. All I can say from the bottom of my heart is I am so grateful that I have the opportunity to be able to share what I love every single day with people that I love. And I have to say thank you so much to my fans because you guys are so damn loyal, and I don't know what I did to deserve you. But if you are broken, you do not have to stay broken. And whether you respect me or not, that's one thing you should know about me, is I care about people. Thank you so much for this. This is for you. Thank you."

Her raw and vulnerable moment was one of the most memorable of the entire night.