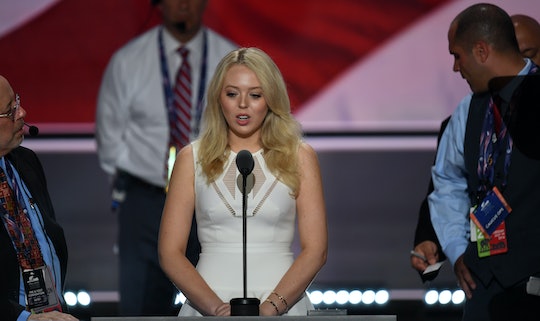 Themed "Make America Work Again," night two of the Republican National Convention featured 19 speakers, including former GOP presidential hopefuls, members of the House and Senate, a golfer, an actor, and two of Donald Trump's children. These speakers addressed our country's current economic state, which has experienced what the GOP's official convention website refers to as "anemic economic growth." The overall goal for Tuesday's speeches was to defend Trump's "solid record" and "experience" and how his status as a businessman will, well, make America work again. One of Trump's children, Tiffany Trump, hasn't been especially vocal about her father's candidacy, and definitely not to the extent that her half-siblings have. But a transcript of Tiffany Trump's Republican National Convention speech shows she's more than ready to take on the challenge.

Though she's said her mother Marla Maples raised her "as ... a single mom," Trump has stayed connected with her father's children, attending Ivanka Trump's wedding and wishing younger brother Barron a happy birthday on Instagram. Trump also posted a birthday Instagram for her father with the caption: "Happy Birthday dad! I love you!" She's also appeared with the family on multiple occasions, from CNN to The Today Show.

On Tuesday night, Trump spoke of her father and even mentioned that she was a newbie to the political convention circuit. (Although her nerves didn't show.)

The 22-year-old graduated from the University of Pennsylvania this past May, securing degrees in sociology and urban studies. Trump wasn’t raised a New Yorker as half-siblings Ivanka, Barron, Eric, and Donald Trump, Jr. have, but was raised by her mother in Los Angeles. The GOP's official convention website describes Trump as "a fashion model, singer, and influential presence on social media." This "social media" credit nods to Trump's 160,000 Instagram followers.

Trump's boyfriend Ross Mechanic, a registered Democrat, sat beside her on the first night of the convention. But if the two held contrary views to Trump's famously bombastic father, none of that showed — in fact, Trump's remarks proved that she was ready to stand by her father no matter what.

A full transcript of Tiffany Trump's convention remarks can be found below:

Thank you all so much.

It's so amazing to be with you tonight and say a few words about my father and your nominee for president. Please excuse me if I'm a little nervous. When I graduated college a couple of months ago, I never expected to be here tonight addressing the nation. I've given a few speeches in front of classrooms of students, but never in an arena with more than ten million people watching. But, like my father, I never back down from challenges, so here I am, a little new to the convention scene but incredibly honored and very confident in the good man that America is coming to know.

It's often said that with enough effort and determination you can do whatever you put your mind to. But saying those words and living them are different things, and my father has lived them. It's one of his defining qualities and I've seen it in action all of my life. Whatever he does, he gives his all and does it well. His desire for excellence is contagious. He possesses a unique gift for bringing that trait out in others, starting with those closest to him. He's always helped me be the best version of myself by encouragement and by example. He motivates me to work my hardest and to always stay true to who I am and what I believe. That's what he does: he draws out the talent and drive in people so that they can achieve their full potential. That's a great quality to have in a father and better yet in the president of the United States.

As a recent college graduate, many of my accomplishments are still to come. But my dad takes such pride in all that I've done so far, no matter how big or how small. I still keep all of my report cards, some dating back to kindergarten, because I like to look back and see the sweet notes he wrote on each and every one of them. Contrary to what you might expect from someone who places an emphasis on results, my dad's comments referred often to the sentiments expressed by my teachers, about how I acted in and out of the classroom, just not even focusing on the letter grades themselves. Donald Trump has never done anything halfway, least of all as a parent. My father always asked about my family in Georgia to make sure that they are healthy and safe. My uncle served in Vietnam and my 97-year-old grandfather served in World War II.

I believe the measure of a person is revealed in their darkest times. For me, the measure of a parent is based on how they support and bolster you when you're down. A few years ago, someone very dear to me passed away and the first call I got, as I knew I would, came from my father. Without his unwavering support and care for me during such a challenging time, I don't know how I would have made it through.

As far too many know, it is the small, loving acts that help an enormous amount in times of grief. My father is good with advice, as you might guess, but he keeps it short, and the takeaway is usually the same: to help us find our own way, and our own gifts. If you do what you love, hold nothing back, and never let fear of failure get in the way, then you've pretty much figured out the Trump formula.

My dad is a natural-born encourager, the last person who will ever tell you to lower your sights or give up your dream. I always look forward to introducing him to my friends, especially the ones with pre-conceived notions because they meet a man with natural charm and no facade. In person, my father is so friendly, so considerate, so funny, and so real. My friends walk away with a glimpse of all that he is and all that he means to me of the strong, protective, kind, and endearing man I am so proud to call my father.

I never pictured myself saying all of this to a packed arena, but I am grateful and fortunate for the chance. I have admired my father all of my life, and I love him with all my heart. God bless you, and thank you.