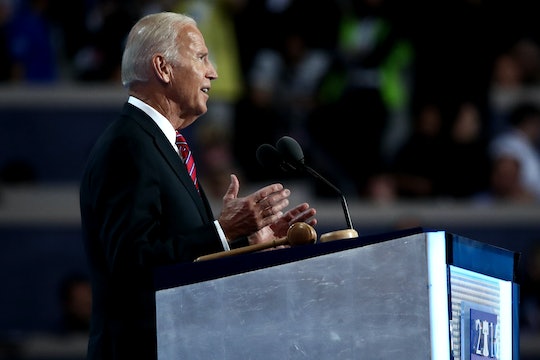 Vice President Joe Biden may have opted not to run for the top spot in the Oval Office in 2016, but that doesn't mean he's disengaging from politics as he wraps up his tenure in the White House. Speaking ahead of President Barack Obama on the third night of the Democratic National Convention, which was themed "Working Together," the current veep delivered an address in rousing support of the party's newly minted nominee, Hillary Clinton. He may still think he would have been the ideal man for the job, but a transcript of Vice President Biden's DNC speech shows that he's all about endorsing and fostering the party unity the Democrats have been aspiring toward.

Despite widespread calls of "Run, Joe, run!" as the political season heated up last year, Biden ultimately announced he wouldn't seek his boss's job in October, saying he was still dealing with the death of his son, Beau, who passed away in May 2015. He's since publicly stated that he regrets the choice, and even told Robin Roberts that he believes he "would have been the best president" on Good Morning America in May. His DNC speech, though, clearly conveyed that whatever his presidential aspirations may have once been, he's ready for a Clinton White House — especially considering the alternative.

Just like Clinton's most prominent political opponent, Vermont Sen. Bernie Sanders — who has urged his supporters to back her no matter what — Biden recognizes that encouraging Democratic voters to embrace their nominee is essential to keeping Donald Trump out of the Oval Office. And his remarks confirm that he knows Clinton is more than qualified to meet the challenges of the office. Under Obama and Biden's leadership, the Democrats truly are now working together.

Ladies and gentleman, eight years ago, I stood on the stage in Denver and I accepted your nomination to be Vice President of the United States. And every single day since then has been the honor of our lives for Jill and me.

Every day, we've been grateful to Barack and Michelle for asking us to join them in that incredible journey — a journey that could only happen in America. But we've not only worked together, as it's become pretty obvious, we've become friends. We're now family. We're family.

Folks, you've all seen over the last eight years what President Obama means to this country. He's the embodiment of honor, resolve, and character. One of the finest presidents we have ever had. This is a man of character, and he's become a brother to Jill and me. And Michelle, I don't know where you are, kid, but you're incredible. You are incredible. When I was talking to Barack today, it's not longer who's going to give the best speech. We already know who did that. You were incredible Monday night. The Delaware delegation, as they say in southern Delaware, Barack and I married way up. Way up.

Folks, as I stand here tonight, I see so many friends and colleagues, like my buddy Chris Dodge in the Connecticut delegation. So many people are here. I see the faces of those who have placed their belief in Barack and me. So many faces, but one. This is kind of a bittersweet moment for Jill and me and our family. In 2008, when he was about to deploy to Iraq, and again in 2012, our son Beau introduced me to the country and placed my name in nomination.

You got a glimpse — I know I sound like a dad, but you got a glimpse — of what an incredibly fine young man Beau was. This wife, Hallie, and his two kids are here tonight, but as Ernest Hemingway once wrote: "The world breaks everyone, and afterwards, many are strong at the broken places." I've been made strong at the broken places by my love, Jill, by my heart, my son Hunter, and by the love of my life, my Ashley, and by all of you. And I mean it sincerely. Those of you who have been through this, you know I mean what I say by all of you, your love, your prayers, your support.

But you know what? We think about the countless thousands of other people who suffered so much more than we have with so much less support, so much less reason to go on. But they get up every morning, every day. They put one foot in front of the other. They keep going. That's the unbreakable spirit of the people of America. That's who we are. That's who we are. Don't forget it.

Like the people in the neighborhood that Jill and I grew up in. She in Willow Grove and my down in Wilmington, and Claymont. The kid in Claymont with the most courage. Boys jumped in when you were double teamed or your back was against the wall. Who became a cop, because he always wanted to help people. The middle daughter of three daughters who always made her mother smile, who was a hero to her sisters, now a major in the United States Marine Corps, because, Mr. Vice President, I wanted to serve my country. The teachers who Jill knows and so many of you know who take money out of their own pockets to buy pencils and notebooks for their students who can't afford them. Why? Why? Because being teacher is not what they do, it's who they are.

You know? I've known Hillary for well over 30 years. Before she was First Lady of the United States, when she become First Lady. We served together in the United States Senate and during her years as Secretary of State, once a week, we had breakfast in my home, the vice president's residence.

Everybody knows she's smart. Everybody knows she's tough. But I know what she's passionate about. I know Hillary. Hillary understands. Hillary gets it. Hillary understands that college loans is about a lot more than getting disqualified from student education. It's about saving the mom and the dad from the indignity of having to look at their talented child and say "Sonny, honey, I'm so sorry. The bank wouldn't lend me the money. I can't help you to get to school." I know that about Hillary.

Hillary understood that for years, millions of people went to bed staring at the ceiling thinking "Oh my god, what if I get breast cancer, or he has a heart attack? I will lose everything. What will we do then?" I know about Hillary Clinton.

Ladies and gentlemen, we all understand what it will mean for our daughters and granddaughters when Hillary Clinton walks into the Oval Office as president of the United States of America. It will change their lives. My daughter and granddaughters can do anything any son or grandson can do, and she will prove it, Mr. Mayor.

So let me say as clearly as I can. If you live in neighborhoods like the one Jill and I grew up in, if you worry about your job and getting a decent pay, if you worry about your children's education, if you're taking care of an elderly parent, then there's only one — only one — person in this election that will help you. There's only one person in this race who will be there, who's always been there for you, and that's Hillary Clinton's life story. It's not just who she is. It's her life story. She's always there. She's always been there. And so has Tim Kaine.

Ladies and gentlemen, I'll state the obvious, and I'm not trying to be a wise guy here. I really mean it. That's not Donald Trump's story. Just listen to me a second without booing or cheering. I mean this sincerely. We should really think about this. His cynicism is unbounded. His lack of empathy and compassion can be summed up in a phrase I suspect that he's most proud of having made famous: "You're fired."

Whatever he thinks — and I mean this in the bottom of my heart. I know I'm called "Middle Class Joe." In Washington, that's not meant as a compliment. It means you're not sophisticated. But I know why we're strong. I know why we have held together, I know why we are united. It's because there's always been a growing middle class. This guy doesn't have a clue about the middle class. Not a clue. Because, folks, when the middle class does well, the rich do very well and the poor have hope that they have a way up. He has no clue about what makes America great. Actually, he has no clue, period.

But, folks, let me say something that has nothing to do with politics. Let me talk about something that I am deadly serious about. This is a complicated and uncertain world we live in. The threats are too great, the times are too uncertain to elect Donald Trump as president of the United States. Let me finish. No major party nominee in the history of this nation has ever known less or has been less prepared to deal with our national security. We cannot elect a man who exploits our fears of ISIS and other terrorists, who has no plan whatsoever to make us safe, and man who embraces the tactics of our enemies: torture, religious intolerance.

You all know, all the Republicans know: That's now who we are. It betrays our values. It alienates those who we need in the fight against ISIS. Donald Trump, with all his rhetoric, would literally make us less safe. We cannot elect a man who belittles our closest allies while embracing dictators like Vladimir Putin. A man who seeks to sow division in America for his own gain and disorder around the world. A man who confuses bluster with strength. We simply cannot let that happen as Americans. Period.

We've had candidates before who have attempted to get elected by appealing to our fears, but they've never succeeded, because we do not scare easily. We never bow, we never bend, we never break when confronted with crisis. No. We endure, we overcome, and we always, always, always move forward. That's why I can say with absolute conviction, I am more optimistic about our chances today than when I was elected as a 29-year-old kid to the Senate.

The 21st century is going to be the American century, because we lead not only by the example of our power, but by the power of our example. That is the history of the journey of America, and God willing, Hillary Clinton will write the next chapter in that journey. We are America, second to none, and we own the finish line, don't forget it. God bless you all, and may God protect our troops. Come on. We're America!