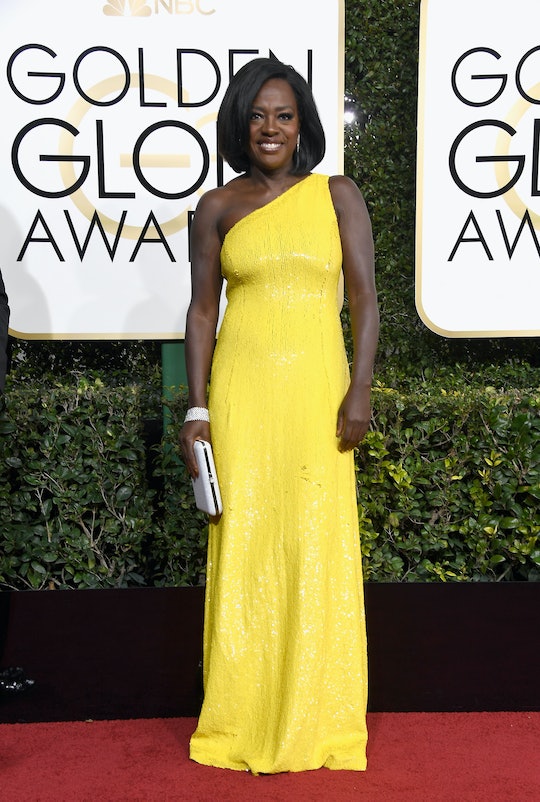 The 2017 Golden Globes awarded Meryl Streep the Cecil B. Demille Award for her "outstanding contributions to the world of entertainment," and her beautiful introduction was delivered by Viola Davis in a speech that was the epitome of Michelle Obama's "when they go low, you go high" mantra. The transcript of Viola Davis's tribute to Meryl Streep shows how incredibly generous her words were, following a couple of years in which Streep has otherwise been embroiled in several controversies of privilege. From claiming that she isn't a feminist but "a humanist," to claiming white privilege doesn't exist because "we're all Africans," to doubling down on her tone-deaf "I'd rather be a rebel than a slave" magazine cover when black women called her out on her use of the term, Streep's comments have sadly mired her public platform, in spite of her prolific acting career.

It's disappointing for such a profoundly talented and well-respected artist to be so incapable of listening when other women do her the kindness of pointing out the privileged place from where she speaks. And it makes Viola Davis's kind words even more impressive. The two first worked together on the set of Doubt, which Davis references in her speech, so they do seem to have a genuinely respectful working relationship.

She stares. That's the first thing you notice about her. She tilts her head back with that sly suspicious smile and she stares for a long time. And you think, "Do I have something in my teeth or does she want to kick my ass, which is not going to happen."

"Well, they don't taste right unless you use ham hocks. If you don't use ham hocks, it doesn't taste the same. So, how's the family?"

And as she continues to stare, you realize that she sees you and that, like a high powered scanning machine, she is recording you. She is an observer and a thief. She reveals what she has stolen on that sacred place which is the screen. She makes the most heroic characters vulnerable, the most known familiar, the most despised relatable. Dame Streep.

Her artistry reminds us of the impact of what it means to be an artist, which is to make us feel less alone. I can only imagine where you go, Meryl, when you disappear into a character. I imagine that you are in them, patiently waiting, using yourself as a conduit, encouraging them, coaxing them to release all their mess, confess, expose, to live. You are a muse. Your impact encouraged me to stay in the line, Dame Streep. I see you. I see you.

And you know, all those rainy days we spent on the set of Doubt, every day my husband would call me at night and say, "Did you tell her how much she means to you?" And I would say, nah, I can't say anything, Julius. I'm just nervous. All I do is stare at her all the time. And he said, "Well, you need to say something. You been waiting all your life to work with this woman. Say something." I said, Julius, I'll do it tomorrow. "OK, well you better do it tomorrow because when I get there, I'm gonna say something." Never said anything. But I'm gonna say it now.

You make me proud to be an artist. You make me feel that what I have in me — my body, my face, my age — is enough. You encapsulate that great Emile Zola quote that if you ask me, as an artist, what I came into this world to do, I, as an artist, would say, I came to live out loud.

For her part, Streep does deserve some credit for delivering a stirring, deeply political speech. In her comments, Streep acknowledged several nominated actors in the room — most of them women — and pointed out how many of them were born in different countries. She went on to say that it's important for us to embrace immigrants in America, because without them, all we'd have to entertain us is "football and mixed martial arts — which is not the arts."

Ultimately, it was powerful to watch both of these women lift up each other and other women in the room.