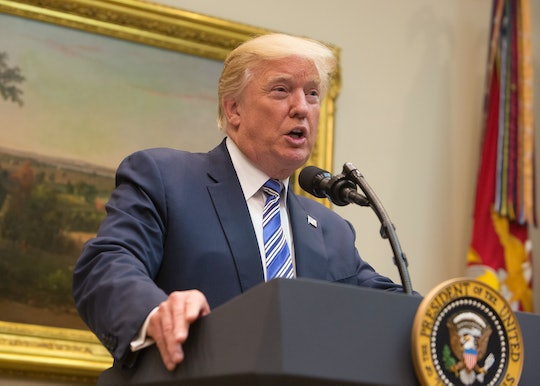 These Quotes From Trump's Calls With Mexico & Australia Are Really Embarrassing

Despite President Donald Trump's long-held belief that he is a gifted deal-maker who could totally reinvigorate the nation pretty much single-handedly if he were elected, the reality of his first six months in office has been quite different. Many of Trump's signature campaign promises — a Mexican border wall, a swift Obamacare repeal — are yet to actually materialize. And the ongoing investigation into possible Russian collusion, not to mention what has lately seemed like a revolving door of White House staffers, isn't exactly instilling a ton of public confidence into the POTUS' abilities. But on Thursday, The Washington Post published transcripts of Trump's phone calls with Mexico and Australia that took place shortly after the president took office, and they've unearthed some eye-opening details about the president, and the seemingly-tense conversations he had with the two world leaders.

Given the big promises Trump made to voters during his election campaign, it's no surprise that the president didn't wait long after his inauguration to get in touch with other leaders to make his intentions clear, and set the tone for their future working relationships. But while Trump insisted at the time that the conversations had gone well, The Washington Post transcripts seem to suggest otherwise. And while Trump has always been unpredictable, some of the quotes from the transcribed phone calls were pretty cringe-worthy.

Trump's call with Mexican President Enrique Peña Nieto took place one week after his inauguration, and given that one of his biggest campaign promises was building a giant border wall and forcing Mexico to pay for it, the conversation was likely never going to be overwhelming positive. Unsurprisingly, it didn't take long for Peña Nieto to get straight to the point: he told Trump he considered it "completely unacceptable for Mexicans to pay for the wall that you are thinking of building," and urged Trump instead to "allow room to look for a new solution between [their] two countries."

But Trump told Peña Nieto that the two men were "both in a little bit of a political bind," and said he needed Mexico to pay for the wall because he'd "been taking about it for a two-year period." Peña Nieto reiterated that he would "continue to be very firm saying that Mexico cannot pay for that wall," leading Trump to conclude that, well, maybe he just needed to quit actually saying that out loud:

Continuing to discuss his decision to make border security a priority, Trump told Peña Nieto that he did "not want people to come across the border," and that he wanted to "stop it cold." One reason why? Trump said that the "drug lords in Mexico" were "knocking the hell out of [the] country," including in New Hampshire, a state he claimed he won because it is "a drug-infested den."

Trump then told the Mexican president that the United States would be more than happy to help deal with the "tough hombres" in his country that he has "not done a good job of knocking [out]." Trump said,

We have a lot of problems with Mexico farther than the economic problem. We are becoming a drug-addicted nation and most the drugs are coming from Mexico or certainly from the southern border. But I will say this – you have that problem too. You have some pretty tough hombres in Mexico that you may need help with, and we are willing to help you with that big-league. But they have to be knocked out and you have not done a good job of knocking them out. We have a massive drug problem where kids are becoming addicted to drugs because drugs are being sold for less money than candy because there is so much of it. So we have to work together to knock that out.

While Trump's call with Peña Nieto was fairly tense, it seemed downright jovial compared to his call with Australian Prime Minister Malcolm Turnbull one day later. Though Trump claimed at the time that the two had had a "very civil conversation," the reality is that didn't seem to actually go very well at all. The reason? Turnbull's attempt to have Trump agree to a deal made by the Obama administration to resettle refugees currently held in Australian detention centers in the United States.

Turnbull told Trump that the current deal between the two countries would still be in line with Trump's "extreme vetting" plan, and that the number of refugees admitted to the United States would still ultimately be up to him. But Trump's main concern appeared to be how he'd be viewed publicly if he held up America's side of the bargain.

Trump told Turnbull he was "the world’s greatest person that does not want to let people into the country," and that even if Turnbull was right about properly vetting them, agreeing to the deal would put him "in a bad position," that "makes [him] look so bad." Trump later said that he felt the deal made him "look like a dope," and that it meant he would "be seen as a weak and ineffective leader in my first week by these people. This is a killer."

Turnbull told Trump that Australia wasn't intending on simply dumping unwanted refugees on the United States, but that it was part of a larger (controversial) policy designed to deal specifically with "people smuggling" by prohibiting entry into Australia by anyone arriving by boat. He told the president,

It is not because they are bad people. It is because in order to stop people smugglers, we had to deprive them of the product. So we said if you try to come to Australia by boat, even if we think you are the best person in the world, even if you are a [Nobel] Prize winning genius, we will not let you in.

Turnbull later told Trump that the refugees in question have already been vetted by Australia, and claimed "the only reason we cannot let them into Australia is because of our commitment to not allow people to come by boat." But Trump seemed to have a bit of trouble understanding the country's policy. He asked Turnbull, "What is the thing with boats? Why do you discriminate against boats?" But before Turnbull had a chance to answer — and once again claiming that the rule is about preventing people smuggling on boats — Trump answered his own question, and said, "No, I know, they come from certain regions. I get it."

While Trump likely had high hopes for these introductory phone calls, it seemed pretty clear from the transcript that his chat with Turnbull wasn't exactly a big win. As the conversation continued, Trump seemed to get increasingly frustrated with the Australian leader, and prior to the end of their call, Trump made his feelings pretty clear. He said,

As far as I am concerned that is enough, Malcolm. I have had it. I have been making these calls all day and this is the most unpleasant call all day. Putin was a pleasant call. This is ridiculous.

To be sure, the fact that the phone transcripts were leaked in the first place is a concern in itself, and raises many questions. But the information they contained was also eye-opening, and sheds light on the reality of the relationships between the POTUS and the leaders of other countries. And from the sounds of it, they may not be going so well.