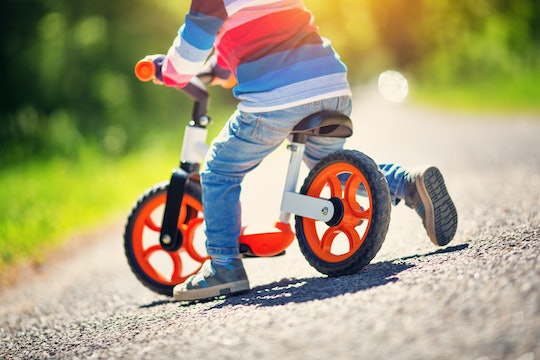 When you think of concussions and other brain injuries, it's reasonable to think of serious situations, like a car accident, to name just one example. But according to a new study published Monday, traumatic brain injuries in children are mostly linked to common household objects, a helpful revelation for parents who want the latest information about how to best keep their kids safe.

Ultimately, researchers discovered that the majority of traumatic brain injuries (TBIs) in American kids and teens are caused by household or other common products, including beds, chairs, and bikes, to name some items. The study also found daily activities, like team sports (basketball, soccer, etc.), can play a big role in TBIs.

Researchers concluded some 72 percent of ER visits involving a minor with a non-fatal TBI can be traced back to seemingly benign things, including area rugs, walls, and stairs.

In case you didn't know already, a TBI "results from a violent blow or jolt to the head or body," according to Mayo Clinic. TBIs can cause "headache, dizziness, confusion, and fatigue," according to Brainline, while "emotional symptoms such as frustration and irritability tend to develop later on during the recovery period."

As for how the findings were determined, researchers mined data from the National Electronic Injury Surveillance System and the National Electronic Injury Surveillance System-All Injury Program, studying about 4.1 million non-fatal TBI cases that occurred between 2010 and 2013, according to Brain Injury. Researchers found the greatest number of injuries were linked to recreation and sports and recreation, aka 28.8 percent of injuries.

Meanwhile, home furnishings and fixtures accounted for 17.2 percent of injuries, home structures and construction materials made up 17.1 percent, while child nursery equipment accounted for 2.7 percent of injuries, and toys were linked to 2.4 percent of accidents. "Uneven flooring and prefabricated stairs often contribute to falls. Slipping, tripping and falling are very common," said Bina Ali, lead author of the study, stated, according to CNN.

Additionally, Ali noted that TBI cases linked to indoor accidents involving beds were greatest among infants and children up to age 4, while kids 5 and up stood a greater chance of getting hurt when playing out outdoors (football, bike riding, basketball, etc.).

The top 10 products linked to non-fatal TBIs are, according to CNN:

Another item parents should watch out for? Car seats.

"Car seats are effective in preventing injuries in infants when used properly in cars," Ali explained, according to Fox 8 Cleveland. "However, sometimes car seats are used outside of the car as baby carriers. When they are handled inappropriately, they can pose a risk." One example? Some parents place car seats on countertops or other high surfaces, areas highly vulnerable to accidents.

Although it isn't easy to read statistics like these as a parent, this study is a good reminder to practice common sense safety, such as making sure kids wear helmets and getting anti-slip pads for rugs and bed railings. It's easy to miss such small details when you're so busy, but our kids are relying on us.