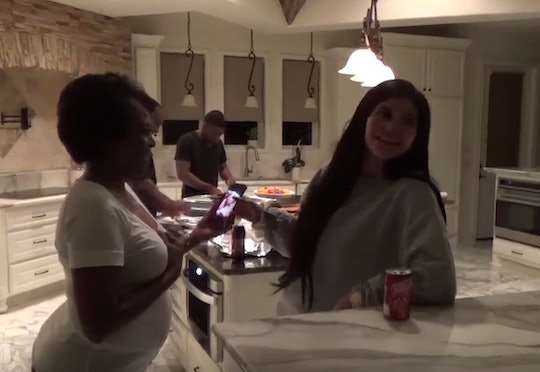 It's got to be pretty sweet to be Kylie Jenner and Travis Scott's baby, Stormi Webster. Not only does little Stormi have some very cool and talented parents, and some pretty sweet cousins and aunts to boot, but she's also pretty much guaranteed to have a very exciting life and, in fact, it's already been more extravagant than you'd imagine. Over the weekend, for example, Scott introduced baby Stormi to his family in Texas and apparently threw her a huge party for the family's first meeting.

Since Stormi was born on Feb. 1, people have not been able to get enough of the baby whose arrival was much anticipated. But since she has been in such high demand, she hadn't been able to make the trip back to Scott's family's home in Texas, according to People. But that changed this weekend when Stormi, Scott, and Jenner all made the trip out to Missouri City, Texas, according to People, to celebrate Stormi's arrival into this world just a few months later.

But instead of having a casual hang out at his parents' place, Scott apparently planned a pretty extravagant bash, according to TMZ. Scott reportedly purchased six floral sculptures, including two of a storm cloud (because this baby will be followed by puns her whole life), and a brunch buffet fit for a major celebration, according to E! News, which consisted of waffles, chicken, and corn bread. This celebration wasn't cheap. — according to TMZ, these floral sculptures cost Scott a reported $7, 145. But how else would you celebrate a baby whose arrival into this world was as anticipated as hers? This party was the perfect way to do just that.

Because Jenner wasn't super active on her own social media accounts to document the bash (unfortunately) not much else is known about the celebration. But luckily, Scott's brother, Joshua did post a photo of himself on Snapchat holding his super cute niece, according to E! News. And just based on that photo (and the scale of the party) you can sense how excited Scott's family was to meet their baby girl. "So happy to finally hold my beautiful Stormi," Joshua captioned the Snapchat.

It's super cool that Jenner is taking baby Stormi out into the world now that she's a few months old. During Stormi's first few weeks of life, according to Marie Claire, Jenner was reportedly "very strict" when it came to anyone visiting her daughter. At the time, an insider told Us Weekly that visitors had to go to Jenner's house to meet Stormi and that Jenner was "very careful about keeping the baby healthy and indoors." This is a completely understandable request — this past flu season was intense and exposing a newborn to those germs would be pretty scary. But it seems that Jenner loosened up those regulations because Stormi was able to make her first trip out of California to visit her family members who must have been so happy to see her.

Scott keeps his personal life pretty private (he's not as camera-friendly as the Kardashian-Jenner family), so people don't know too much about his home or family life. However, people did get a glimpse of this during Jenner's pregnancy vlog, where she showed herself and Scott flying to Texas to spend time with Scott's family. In the vlog, Scott's mom and dad can be seen fawning over ultrasound pictures of Stormi. "Look at my baby!" Scott's mom said in the video. "I'm so excited oh my god." If they were that excited to see an ultrasound picture of Stormi, imagine how they felt when they actually got to hold her. Needless to say, a party like this definitely sounds acceptable for this huge occasion.