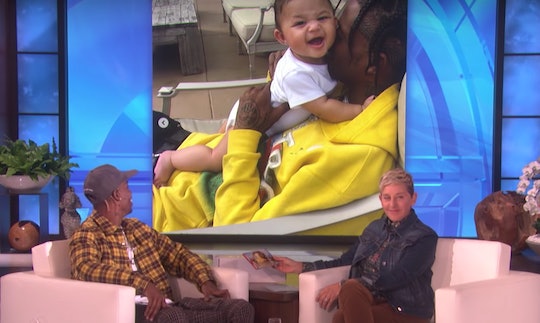 No matter how excited you are to be welcoming your child into the world, there's no question that childbirth can be a downright daunting experience — whether you're the one actually doing all the work, or the one standing by and watching it all happen. In an interview with Ellen DeGeneres Monday, Travis Scott revealed the scariest part of being in the delivery room for Stormi's birth, according to E! News, and honestly, it's something that an awful lot of birth partners can likely relate to (*especially* those with weak stomachs).

In his first sit-down interview with the talk show host, Scott talked about what it was like to become a dad for the first time when Kylie Jenner gave birth to their daughter in February, and admitted that he was actually pretty grateful that Kris Jenner was there to take control of the situation.

The 26-year-old rapper told DeGeneres that since it was his first time ever being in a delivery room, Kris helped "walk [him] through this whole process," and it sounds like he was definitely relieved to have backup once it came time for Kylie to deliver the afterbirth.

"[There's] like this thing called the placenta that I'd just been hearing about. Oh my God. So I was fearful of that. But I cut the umbilical cord, and she held it down — Mama KJ. She's the best, man," he told DeGeneres.

Thankfully for Scott though, his fear of the placenta quickly gave way to his joy over meeting his daughter for the first time. The Astroworld rapper told DeGeneres that once he was able to hold Stormi for the first time, he was shocked at how quickly he fell in love with her. Scott said:

Going into [the birth] I was, like, nervous and scared. You know, we were just both, like, young. But when you first have a baby in your arms, it's just, like, it's uncontrollable. It's like this whole, like, warp that takes over your whole body. I never thought I could just, like, love something so hard, you know? It's crazy.

It's not the first time though that the first-time dad has opened up about just what an emotional experience it was to see his little girl come into the world. Scott and Jenner appeared together on the August cover of GQ, and in their accompanying joint interview, Scott said that he'd actually started to cry in the delivery room as soon as Stormi was born, according to People.

And though he didn't quite voice his concerns over seeing the placenta, Scott did tell the magazine that being in the delivery room with Kylie was "crazy," and said, "I was there through the hell … the epidural and sh*t. Crazy."

Although the shock of the experience may not have yet worn off, these days, it sounds like little Stormi is hitting some major milestones. Scott told DeGeneres that his now 9-month-old daughter was "so animated," and said "she's like running around the house right now on this new, like, walker, and she's like turning into a full-blown runner."

From the looks of things though, Scott isn't *just* a smitten dad — he's also one seriously romantic boyfriend. On Nov. 6, Kylie shared a video on Instagram that showed her home filled with roses and candles, an act which quickly sparked online speculation that Scott may have proposed. But according to TMZ, sources close to the couple nixed the idea, and said that it was actually Scott's way of celebrating Kylie's Kylie Cosmetics partnership with Ulta Beauty.

Although they may not be tying the knot, it sounds like Kylie and Scott have had one seriously incredible year — in addition to their professional success with Kylie Cosmetics and his chart-topping album, Astroworld, they also became parents for the first time, and are now watching their little girl grow up seriously fast.

As much as Stormi's first nine months have probably passed in a blur though, it sounds like Scott's been loving every minute as a dad. Even if he still may not quite be able to get the mental image of Kylie's placenta out of his head.