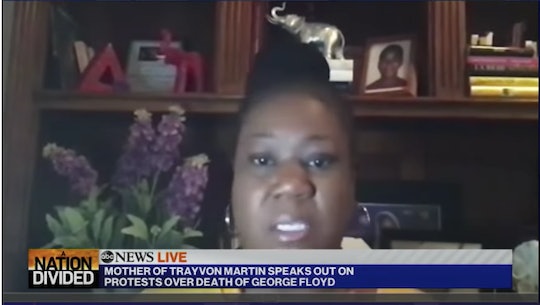 More than eight years after her 17-year-old son was fatally shot while walking home from a convenience store, wearing a hoody with Skittles in his pockets, Trayvon Martin's mother Sybrina Fulton has opened up following the police killing of George Floyd, a 46-year-old Black man who repeatedly said "I can't breathe" as now-fired Minneapolis police officer Derek Chauvin knelt on his neck for nearly nine minutes.

During a recent interview with ABC News, Fulton said that she's been "on a rollercoaster" since seeing the distressing footage of Floyd's death. "I've been up and down. There have been times when I just cried," she said. "When I heard George Floyd yell out for his mother, I cried because I imagined me being his mother, or my son being there and calling out for me and I wasn't able to help him and he wasn't able to help himself."

"It has been an emotional rollercoaster, I'm sure, for every mom hearing George call out for his mom," she continued.

Fulton's 17-year-old son was killed on Feb. 25, 2012 in Sanford, Florida when former neighborhood watch captain George Zimmerman fatally shot him. Zimmerman was charged with second-degree murder and manslaughter for Martin's death, but went on to be acquitted of all charges, claiming he acted in self-defense, NPR reported in 2013. In the years since, Martin's mother has been working to bring awareness to end gun violence, starting with the Trayvon Martin Foundation. Fulton is now a candidate for the Miami-Dade County Commissioner.

While speaking about Floyd's killing on May 25 with ABC News this week, Fulton empathized with people's anger and encouraged protestors to "stay focused."

Fulton also reflected on Floyd's death in an emotional Instagram post on Sunday. "For every Mother, when #GeorgeFloyd yelled out for his Mom, it broke our heart," she wrote.

As he struggled to breathe under Chauvin's knee during his last moments, Floyd could be heard crying out "Mama! Mama! I'm through." Floyd's mother died two years earlier, according to CNN.

"And if you have a son or daughter in heaven, it hit differently," Fulton wrote on Instagram, adding the hashtags #JusticeForGeorgeFloyd, #ICantBreathe, and #CircleOfMothers.

The four officers involved in Floyd's arrest — Chauvin, Thomas Lane, J. Alexander Kueng and Tou Thao — were all fired the day Floyd's death. Chauvin has since been charged with second-degree murder and the other three officers remain under investigation, according to The New York Times.