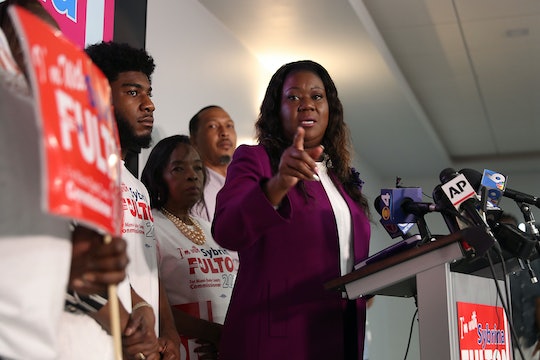 Years after her teenage son's killing pushed her to become an advocate for gun control and racial equality, Trayvon Martin's mother, Sybrina Fulton, is running for office in her hometown in Florida, announcing this week that she had officially qualified as a candidate in the Miami-Dade County Commissioner race.

Fulton had first announced her plans to run for office in May 2019. "My time as a public servant began 30 years ago at Miami-Dade County," she said in a statement shared on Instagram. "Since 2012, I have advocated tirelessly to empower our communities and make them safer. But the work is not done. I am proud to announce that I will run to represent District 1 on the county commission."

In a campaign video from May 2019, Fulton said she initially had not wanted to "be the voice for Trayvon" after his death but ultimately realized she had no choice. Martin, 17, was shot and killed by a white Hispanic neighborhood watch volunteer in February 2012 while walking back from a convenience store.

"Now, I'm called to act, and called to serve," Fulton said in the video. "It became clear to me there's an opportunity to turn our family's tragedy into something positive for many other families."

According to Fulton's campaign website, her resume includes more than 20 years of experience working in the Miami-Dade government. She previously worked as a housing agency employee assisting low-income renters, HuffPost reported. After her son's killing in 2012, Fulton became an active advocate for gun reform and a member of Mothers of the Movement, a group comprised of Black mothers who lost their children due to either gun violence or police brutality.

In an August 2019 essay for Elle, Fulton explained that, like many others, she'd become fed up with what she was seeing happen in politics and wanted to bring about positive change. "I want to start in my own backyard. That’s why I’m running for Miami-Dade County commissioner because it’s right here," Fulton wrote. "A lot of people thought that I should run for a seat that was higher, but I just want to start here and make change."

While she has said her campaign for county commissioner will maintain a focus on gun safety and violence prevention, her priorities also include advocating for a better transportation system, economic opportunity for all, and affordable housing. One thing she doesn't support, are calls to defund police departments.

In her essay for Elle, Fulton revealed her father had retired from the Miami Police Department, making it impossible for her to hate police officers. "I just don’t like bad, crooked officers, and I like professional, service-oriented, respectful police officers," she wrote. "When I call 911, I want the police officer to come and help me. I don't want to feel intimidated when I call, and I don't want our kids to be afraid."

Fulton recently told The Guardian that, as county commissioner, she wanted to "bridge the gap between the law enforcement and the community."