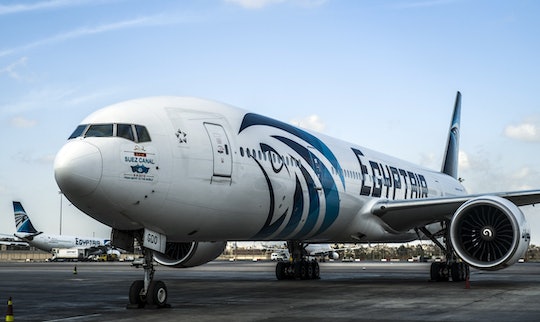 Tributes To EgyptAir MS804 Victims Show We're All In This Together

Early Thursday morning, EgyptAir flight MS804, a Cairo-bound flight out of Paris, vanished from radar while carrying 66 passengers, including two children and an infant, according to Al Jazeera. The plane made "sudden swerves" before eventually crashing into the Mediterranean, Greek Defense Minister Panos Kammenos said during a news conference, Al Jazeera reported. There are conflicting reports about whether a distress signal was received, and it's too soon to tell what caused the crash, but early tributes to the EgyptAir MS804 victims show a heartening solidarity in the face of tragedy.

In a global climate that's becoming increasingly divided over national, political, and religious lines, the one silver lining in the loss of so many innocent lives is that it can briefly bring many people together. We may not agree on much (terror speculation, of course, cropped up immediately after news of the crash broke), but we can all sympathize with the families of the victims involved. Scrolling through Twitter, the outpouring of condolences comes from a wide variety of sources and people who wouldn't be expected to agree on anything. But what we can all agree on is that this is a time for compassion for those left behind — no matter where they live or what they believe.

Certainly, there are people out there who are using the crash as a tool of hate (it is Twitter, after all, and I'm looking at you, Donald Trump). But focusing on the reason for the incident overlooks the victims, and once we overlook the victims, we've lost our humanity. Instead, many are choosing to concentrate on the universal truth that we can all understand love and loss. Everyone has experienced the fear of having someone taken too soon, and many have seen it happen. We can all agree that there were innocent victims aboard MS804, and that's who we should be thinking about. Leave the cause of the crash to those in charge, because stewing about it won't do anyone any good.

This is how we'll get through this. Not just the crash of MS804; this is how we'll get through life together on planet Earth. Not by name-calling and zeroing in on everything that's "wrong" about the way our neighbors think and act and pray, but by identifying and celebrating our similarities. We all want peace and safety. We all want to keep our loved ones from danger. We may have different ideas of how to get there, but our end goals are the same. Beneath everything else, we're all human.