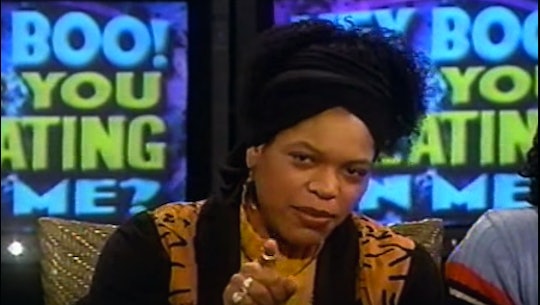 Tributes To Miss Cleo Range From Touching To Strangely Humorous

Earlier today, TV psychic and '90s pop culture icon Miss Cleo lost her battle with colon cancer, dying in a hospice center in Palm Beach County, Florida. Miss Cleo was just 53 years old. According to TMZ, Youree Harris, Cleo’s real name, had been hospitalized recently, but she was discharged last week and placed in hospice care. And while word of her death is still spreading, many have already expressed their condolences, and the tributes to Miss Cleo have been genuinely touching, and — OK, OK — strangely humorous.

(I feel bad writing it, I do. But the woman was a psychic, so you have to know where Twitter is going to take this one.)

But for those who do not remember Miss Cleo, let me attempt to explain the presence she was. You see, Miss Cleo was a psychic — for the Psychic Readers Network — whose claim to fame came about in the '90s thanks to a series of television commercial “readings.” She was a straight-shootin’ woman (well, straight-shootin’ for a psychic), her laugh was infectious, her thick Jamaican accent was unmistakable, and her “call me now” catchphrase — along with “the cards never lie” — made her something of a cult figure when I was growing up. However, after the Psychic Readers Network closed its doors in 2002 due to a series of legal issues, Miss Cleo took on numerous voice recording jobs, including voicing a character in the video game, "Grand Theft Auto: Vice City."

But why does all of this make Miss Cleo so unique? Honestly, I don’t know. She was just in the right place at the right time.

As for how people are responding to the news of her death, as previously mentioned, Twitter commenters are expressing everything from genuine sadness or morbid humor.

Psychic career aside, Miss Cleo also made waves in 2006 when she finally came out and revealed one of her greatest truths to the Advocate, that she was a lesbian.

[Coming out was] scary...because in my personal experience, black cultures throughout the world have a more difficult time accepting homosexuality in their family. I have family members who will be shocked; they don’t know. I have some family members who are very close to me, and they do know. But I’ve been afraid of the wrath, of the exile. When I came out to a number of friends in the late ’80s I had a number of friends who turned their backs on me and walked away. That was really intense. I really believed they were my friends.

According to TMZ, a rep for Cleo confirmed she remained a "pillar of strength" during her illness and died "surrounded by family and friends.”