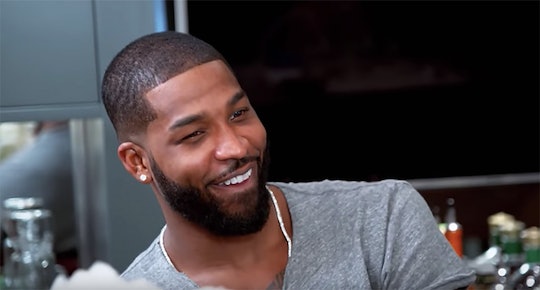 After Thompson's alleged infidelities, which included reportedly cheating on Kardashian when she was 9 months pregnant, the pair's relationship wasn't exactly on solid ground. Things became even more intense when, in late February, Thompson allegedly cheated on Kardashian with the family's close friend, Jordyn Woods.

“They’re both at fault. I’m not blaming just Jordyn," Kardashian said about the incident in an episode that aired in June, according to People. "Tristan, we’ve all known what he was capable of. Look what he did when I was nine months pregnant. I knew who he was. I never in a million years thought that’s who she was.”

Despite the heartache, Kardashian has always maintained that she would never let her issues with Thompson interfere in True's upbringing.

"I know she's going to want to look back at all of her childhood memories like we all do," she told divorce attorney Laura Wasser during a May appearance on her Divorce Sucks! podcast, according to Motherly. "I know her dad is a great person, and I know how much he loves her and cares about her, so I want him to be there." Aww.

"Happy birthday @khloekardashian. You are the most beautiful human I have ever met inside and out," he penned. "Thank you for being an amazing mommy to our princess True. She is blessed to have someone like you to look up to."

He continued, "I wish you nothing but more success and sending you positive blessing your way. Enjoy your day Koko."

No mater how you might feel about Thompson, it's clear he wants to be amicable with Kardashian, which can only mean good things for True in the long run. And it's important to note that Kardashian doesn't have to forgive Thompson in order to co-parent — both parties can put their bad blood aside to come together for their child.

It's possible Thompson is setting the stage to become a bigger fixture in True and Kardashian's lives, as he recently purchased a $6.5 million home in Encino, California, which is just 25 minutes from Kardashian's pad in Calabasas, as Us Weekly reported. The luxurious pad reportedly boasts seven bedrooms, eight bathrooms, and an expansive entertaining area complete with an "in-ground pool, a marble patio, deck, oversized spa and an outdoor kitchen with a bar counter." Yep, it sounds like True will be living large when she visits her dad.

Given Thompson's new living arrangements, it's understandable that some fans might wonder how the move could impact their romantic relationship. And if you were curious about a possible reconciliation, there's a good chance that it's not in the cards.

“I’m having such a great time spending time with my daughter,” Kardashian told Extra about the possibility of dating. “I’m loving family time, me time, and being with True. It’s awesome, that’s my focus right now.”

For now, it sounds like Kardashian and Thompson are focusing on True's best interests, and I have a feeling that the basketball star's birthday tribute to her is just the beginning of their co-parenting relationship.