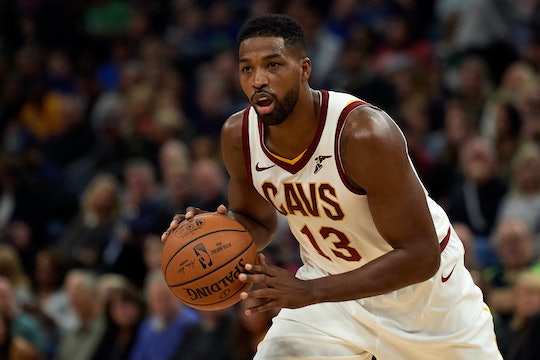 Although he doesn't often speak publicly about fatherhood and is sometimes in headlines for less-than-lovely reasons, NBA star Tristan Thompson clearly loves his two kids. And in a new Instagram post, Thompson gave a rare shoutout to his kids, True and Prince, with the help of an extravagant new pair of kicks.

The Cleveland Cavaliers star is dad to two children; he is the father to a 2-year-old son, Prince, with Jordan Craig, according to People, and an 11-month-old daughter, True, whom he shares with Khloé Kardashian. In spite of having a high profile career and being involved in such a high profile family like the Kardashians, Thompson tends to keep this side of his life private.

But, on Tuesday evening, Thompson put his little family in the public eye in a very sweet way. In a new Instagram post, Thompson shared a photo of his custom designed purple Nike basketball shoes with his daughter, son, and younger brother, Amari's name on the front of them.

"Today is a very special day for me and these kicks are very special to me," Thompson wrote in the caption of the Instagram post.

Although the sneakers might have clashed with his burgundy and gold Cleveland Cavaliers uniform, he was wearing these special purple sneakers for a reason. March 26 is "purple day" — a day meant for people to wear purple to show their support for the 1 in 100 people living with epilepsy, according to Epilepsy Toronto.

Epilepsy Toronto is a charity very close to Thompson's heart. With the help of Epilepsy Toronto, Thompson started the Amari Thompson fund in 2013 to help families who are affected by epilepsy. Thompson explained to NBA.com that he plays every single game for his brother, especially since his strength keeps him going.

"What makes [Amari] special, is just his fight — especially a kid his age, being able to go through what he goes through," Thompson told NBA.com. "He continues to fight and always be in high spirits. So, for me, as the older brother and kind of the pioneer of the family, I think it's just my job to be able to provide and do whatever it takes — not just for Amari, but for my brothers just to be happy and comfortable."

And now that Thompson is a father of two, he also has to provide for them just as much as he has provided and helped his siblings. Knowing this, it makes Thompson's shoes from Tuesday night all the more special.

While Thompson openly talks about his involvement with helping his brother, he is just a little more silent when it comes to talking about his children — but he does share a tidbit here and there.

For instance, in an interview on Uninterrupted's Road Trippin' podcast, Thompson told the show's hosts in May 2018 that Prince is getting so big and having a little girl was a transformative experience, according to PopSugar. "It's way different, but it's fun though," Thompson said. "It changes you."

Although Thompson might not always talk about his two children, rest assured that he is always thinking about them. And now he can bring them with him on the basketball court, too.