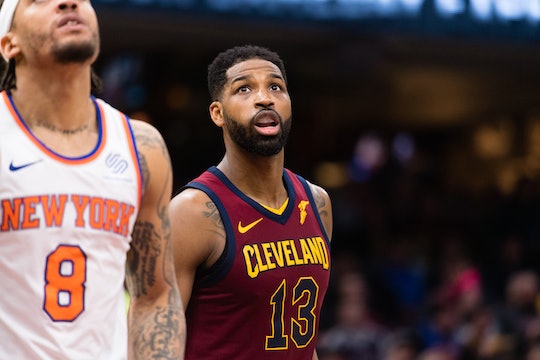 On April 12, Khloé Kardashian welcomed her first child, a daughter named True Thompson. Despite the purported cheating scandal that went down just days prior, Khloé's social media accounts have not been scrubbed of her photos with boyfriend, and father of her baby, Tristan Thompson, and in the weeks since her daughter's birth, the posts have only been about True. Until yesterday, Thompson had remained totally mum online, but has officially broken his social media silence. Surprisingly, Thompson's first Instagram post in weeks didn't mention baby True or Khloé, and fans are really not happy about it.

Like any KarJenner life event, True's birth was met with tons of excitement from fans, and unfortunately, a lot of surprise given the drama with Thompson. Days before Khloé gave birth, the Daily Mail and TMZ both published footage that purported to show Thompson allegedly with other women. Romper's requests for comment from both Kardashian and Thompson's reps regarding the cheating allegations were not immediately returned.

On Sunday, Thompson finally returned to Instagram with a photo of himself from one of his basketball games, as Us Weekly reported. He commented on his team's win, but mentioned nothing about his new daughter or the allegations that have been floating around since her birth. (ELLE even described the post as "tone deaf.")

Some may feel that it's odd for someone who's just welcomed a new child to not make mention of it at all on social media, and his silence might seem especially strange given that their relationship — and new child — are so public already. However, fans theorize that this maybe isn't an accident.

In response to Thompson's comment about the "atmosphere" being right for the win, one fan wrote, "What an atmosphere your daughter has to live in..." Another commented, "You're cancelled," while another wrote, "Disappointed but not surprised. Do better my dude."

They are, of course, referring to the fact that Thompson returned to Instagram to talk about a basketball game, but not his girlfriend or new child. Given the circumstances, one fan did come to his defense, arguing:

Some of y’all are so ridiculous! I don’t agree to what he did to Khloe, or the last girl for that matter... but this man doesn’t owe a “public apology” to any of y’all, he only owes it to Khloé. Further more, he doesn’t have to post a public announcement about how excited he was about his baby being born. Not everything has to be publicly shared, he doesn’t owe y’all anything.

On April 16, Khloé took to her own Instagram to announce the birth of their daughter, as Us Weekly reported, sharing a photo of a room filled with pink balloons, and the announcement:

However, despite tons of rumors, nobody has directly spoken about the alleged cheating scandal, until Khloé's sister, Kim Kardashian, appeared on an episode of The Ellen DeGeneres Show on April 23. Cosmopolitan reported that, when asked if she had any comment on the situation, she said: "Like, I don’t even know how to describe it besides it’s just so f*cked up." She continued:

I think [Khloé] just wants a clear head and just wants to be alone with her baby and figure that out and the family’s flown out there a few times. I think it must be so hard to have your heart broken and fall in love all in a day or two, all happening at the same time and I think she just needs some space.

Though it's true that Thompson certainly doesn't owe Khloé a public apology, maybe she does deserve it, given how everything else has played out. Though neither party has directly confirmed or denied the allegations (despite for, of course, Kim's recent comments), failing to acknowledge his girlfriend and daughter entire weeks after such a big life event is certainly not sitting well with their fans.