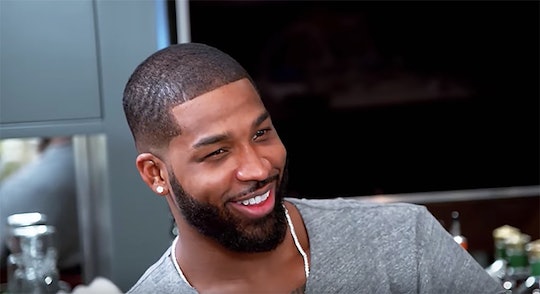 Khloé Kardashian's ex, Tristan Thompson, doesn't often share photos of his kids to social media. Although he's keen to share snaps of his day-to-day life, it's rare to see posts about his two kids, 2-year-old Prince and 1-year-old True Thompson. So it's not too hard to see why Tristan Thompson's photo of True with her paternal grandma is getting lots of attention. Not only is the pic adorable, but it has fans seeing double in a major way.

NBA star Thompson, who had True with Kardashian in April 2018 before the two parted ways in February, has been spending time lots of quality time with his daughter these days, as Hollywood Life reported. And it looks like Thompson is using this precious time to deepen the bond his mother, Andrea Thompson, has with the little girl. Want some proof? Look no further than this adorable photo Thompson shared on Saturday of Andrea aka "GiGi" spending quality time with her granddaughter.

"GiGi and Baby Trueeee," Thompson captioned the shot, to the delight of fans. "

Almost immediately, fans chimed in to note how similar the the two look.

"She favors her grandma," one person wrote. "Strong genes!"

Someone else said: "They are both beautiful,"

"Awww they look alike," noted another fan, while someone else added, "Twins."

As Top Style Today noted, the Thompson clan, who is originally from Toronto, Canada, is a close one. Thompson acknowledged the matriarch this past Mother's Day, posting on Instagram, “I’m so blessed to have a mother that loves me the way you do and willing to sacrifice everything for her kids.”

It's not clear if Khloé remains in contact with Andrea, but it's obvious she remains committed to co-parenting with Thompson nom matter what. “Why would I ever hate anyone who helped create such an angel?” Kardashian wrote online this past summer about her ex, according to People. “People make mistakes, but I won’t hurt my own healing by holding on to hate. I’m too busy raising my beautiful baby and securing that [money] to hate any individual. Sweet True has always looked like her daddy. She’s beautiful!!”

Thompson has also remained upbeat in terms of his feelings about former partner Kardashian. "Happy birthday @khloekardashian," he posted on Instagram this past June 27. "You are the most beautiful human I have ever met inside and out. Thank you for being an amazing mommy to our princess True. She is blessed to have someone like you to look up to. I wish you nothing but more success and sending you positive blessing your way. Enjoy your day Koko."

I like that this pair has the right attitude as True deserves to have parents who can be mature enough to cheer her on from the sidelines together. In fact, that's exactly what happened at True's cotton candy-filled birthday bash in April.

Scrolling through Kardashian's Instagram, it's more than clear that True is a happy baby, and it's awesome that she gets to spend time with all of her family members, including grandma GiGi.