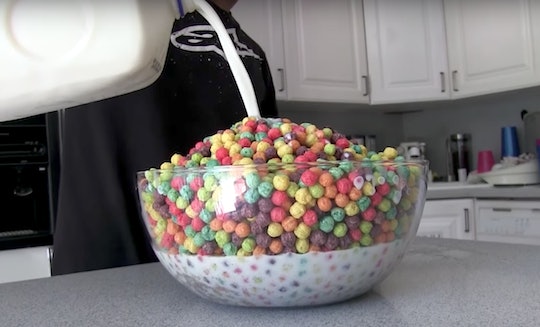 Trix Is Bringing Back Artificial Flavors, & It's Not *That* Much Worse For Your Health

Nearly two years after food maker General Mills controversially decided to remove some of the the junkiest ingredients from Trix cereal, it's clear who the silly rabbits really are: those who believed that consumers were truly ready to say goodbye to the neon version of the cereal in the name of health. That's because, starting in October, Trix cereal will reportedly reintroduce dyes and artificial flavors. In fact, because cereal lovers evidently can't reach a consensus about whether they'd rather shun artificial additives or keep them around for nostalgia's sake, the soon-to-be revived "Classic Trix" will soon once again hit shelves right alongside its more modern, if toned down, artificial colors and flavors-free counterpart.

Believing that they were giving the people what they wanted, so to speak, the higher-ups at General Mills reportedly replaced the iconic version of the cereal, complete with its blindingly bright colors, with the more natural version in January 2016. But it turned out that they misjudged their fans a bit, as, ultimately, consumer feedback showed that, "Some really liked it, and some really wanted the old Trix back," General Mills spokesman Mike Siemienas told The Washington Post. And get the old Trix back they will.

So all you millennial moms out there, now's your chance to introduce your kid to Trix as you knew them as a kid — or opt for the more natural route, the choice is yours.

According to People, the Trix revamp included replacing the Red 40 and Yellow 6 food dyes long used in the 63-year-old cereal with natural coloring sources, such as fruit and vegetable concentrates and spice extracts. The result? A more muted cereal that sports a much duller read and no longer showcased its blue or green pieces, as General Mills could not figure out a way to adequately replicate them. And even though Erika B. Smith, Ph.D., technology director for General Mills, reported at an industry conference in July 2016 that sales were "great," according to Food Business News, some longtime Trix lovers just wanted their regular cereal back.

And now they're getting it.

Of course, the knee jerk reaction to all this, for some, is to wonder how some people could ignore the health aspect of all this. And while it's true that artificial dyes have been associated with negative health outcomes, such as ADHD, the fact remains that the artificial flavors and dye-free iteration of the cereal isn't exactly healthier than the classic version that so many love so much.

For example, The Washington Post reported that both versions of Trix are pretty darn sugary. And according the blog Extra Crispy, leaving dyes out of the picture doesn't change the fact that Trix and other sugary breakfast cereals are loaded with sugar and trans fats, and that many people who eat them, often eat huge quantities at a time.

So, it's not exactly a step back that the artificial flavors and dyes will be reintroduced, and here's why: Trix is not a food that kids should be guzzling down every morning, anyhow. Instead, it's a treat for once in a while or a special occasion, whether it's the "classic" version or not. That being said, parents who pick up some Trix at the grocery store should not necessarily feel like the "healthier" Trix is any more of a source of nutrition just because the artificial flavors are dyes don't have to fill up the bowl. General Mills' bringing back those ingredients isn't disrupting an otherwise beautifully balanced breakfast.

Eat it for nostalgia's sake, break it out to celebrate a solid report card, and leave it at that. Yep, Trix is definitely still for kids, just in moderation.