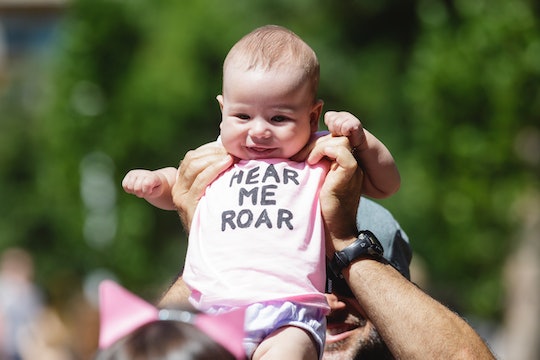 Baby Names Can Be Rejected By States, New Case Shows

As much as some people might complain about so-called "kre8tive" spellings or odd trends in baby naming, as it turns out, baby names can actually be rejected by states, which is a little weird. So people can't actually name their kids whatever they want, as much as someone might really have their heart set on Applebottom Umbreon Britney Spears for their next kid.

As much as I might not totally approve of a name like Applebottom, I've never really thought twice about whether someone else should have a say in what parents end up naming their child. But apparently, some states do get to step in and say, "Hey, Chuckie Beelzebub is a no go, sorry," if they so choose. According to Jezebel, however, a recent case actually involves surnames — in particular, the surname chosen by a couple in Georgia for their newborn daughter.

As the site reported, Elizabeth Handy and Bilal Walk chose a name for their daughter that was rejected by the state. The parents apparently wanted to name their kid ZalyKha Graceful Lorraina Allah. And the issue the state of Georgia had wasn't with ZalyKha, Graceful, or Lorraina — the couple was just told they can't give her the surname Allah.

According to Jezebel, the BBC, and its own Twitter account, the American Civil Liberties Union (ACLU) of Georgia has taken on the case, with the Twitter account tweeting out on March 23, "The government has no business telling parents what they can and cannot name their children. Our suit against @GaDPH," along with a link to a page on the ACLU website about the case.

As reported by the BBC, The Georgia state Department of Public Health has refused to issue the 22-month-old a birth certificate, and the parents and the ACLU are concerned that, without a birth certificate, the baby girl's parents won't be able to get a Social Security number for their daughter. The parents also worry that the girl's identity and rights as a U.S. citizen will be questioned in the future.

Interestingly enough, the BBC also reported the lawsuit states that the unmarried couple already has a young son named Masterful Mosirah Aly Allah. So, what gives? Does it depend on who looks over the application, and whether they had their appropriate level of caffeine that morning?

State officials decided the child's surname can be Handy, Walk, or a combination of the two, but not Allah. Jezebel reported that the couple could choose a name considered appropriate by state officials, then receive a certificate, and then petition for a name change, but they don’t want to do all of that. They just wanna give her the name they chose in the first place.

Georgia isn't the only place where the government has some say over what someone names their child. Jezebel reported that in Louisiana the law says the mother’s maiden name must be used if she's unmarried, or the father’s surname if they are married, unless both parents agree to change it.

And in some states, such as Arizona and Washington, the number of characters a surname can be is restricted. In other places, like Texas, the use of accents and umlauts is also restricted. Down in Alabama, you can do "whatever you want," according to Jezebel.

As far as first names, or names in general that aren't the baby's surname, there have been some eyebrow-raising incidents in the United States in the past that got some attention. According to The New York Times in 2009, when Deborah and Heath Campbell of Easton, Pennsylvania, once attempted to order a birthday cake from a local supermarket the previous year, Child Protective Services were called, because it turned out the birthday boy was named Adolf Hitler Campbell. Eek. The poor kid also has sisters named JoyceLynn Aryan Nation Campbell and Honszlynn Himmler Jeannie Campbell. It's unclear why that wasn't caught by the state earlier, unless Pennsylvania is a little more lax in their naming laws.

The ACLU of Georgia posted about the case on March 23, stating that, "the civil liberties issues implicated in this litigation are: free speech, equal protection, and the right to raise one’s child." It remains to be seen whether, with the ACLU's help, little ZalyKha Graceful Lorraina Allah will end up with that name in the end.