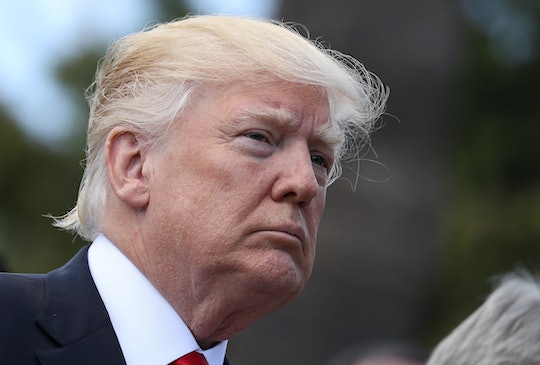 Trump Accused The Media Of Making Up Sources

President Donald Trump's beef with the media isn't exactly new: ever since he began his campaign for the presidency, he has repeatedly taken aim at "the biased and phony media" and labeled various outlets "fake news." But on Sunday, in a worrying new tirade against the press, Trump accused the media of making up sources and fabricating political leaks — and he did so without providing proof or referring to any specific news stories.

"It is my opinion that many of the leaks coming out of the White House are fabricated lies made up by the #FakeNews media," Trump wrote on Sunday. He continued:

Whenever you see the words 'sources say' in the fake news media, and they don't mention names ... it is very possible that those sources don't exist but are made up by fake news writers. #FakeNews is the enemy!

Romper reached out to the White House for comment on Trump's tweets, but did not hear back immediately. However, Trump's allegations call into question the media's use (and protection of) of anonymous sources, which journalists frequently rely on to ensure that they continue to receive crucial information without placing anyone's job or safety at risk.

Considering that Trump's tirades against the media have become fairly commonplace, it can be easy to simply dismiss his comments on Sunday as just another tweetstorm. However, by putting forth unfounded accusations against the press, the president is continuing to sow distrust of the media among Americans — and it seems many Americans are readily buying into the president's "fake news" narrative.

Considering that the free press is one of the most important checks on power a democracy has, Trump's accusations are incredibly dangerous. By making ambiguous, accusatory statements about the media, Trump is positioning himself as the only credible source of information — free to say what he wants or omit information without opposition.

Trump's attack on the media on Sunday was also vague: he didn't mention specific leaks or which sources' claims he was labeling as false. Was he referring to reports of an investigation into senior adviser Jared Kushner? Did he mean that the recent leaks to the media on the Manchester attack were false? Or was it the reports on his possible White House shake-up that he was referring to? By continually remaining vague, Trump makes it easy for followers to doubt any (and all) news reports — and by posting on social media alone, he can avoid follow-up questions and direct requests for evidence.

Anti-media attacks are nothing new when you start flipping through the pages of history, and seeing a president attempt to widely discredit the press should worry Americans everywhere. As Sen. John McCain told NBC in February, "That's how dictators get started." He continued:

They get started by suppressing free press. In other words, a consolidation of power. When you look at history, the first thing that dictators do is shut down the press. ... I hate the press. But the fact is we need you. We need a free press. We must have it. ... If you want to preserve democracy as we know it, you have to have a free and many times adversarial press.

It's easy to dismiss Trump's words as just the mere tweets of someone unhappy with events he cannot control, but it's incredibly important not to. A free press is vital to a healthy democracy — and Americans need to hold leaders accountable when they begin to undermine the media.