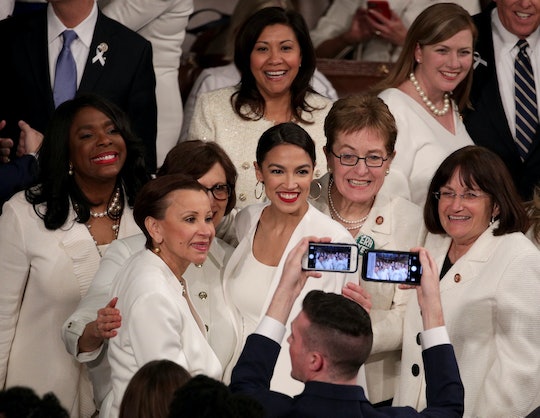 In an arguably surprising moment, President Donald Trump gave a nod to Democratic congresswomen during his State of the Union address on Tuesday, Feb. 5. Some people on Twitter are referring to the moment as the best part of Trump's speech because it's symbolic of how greatly women dominated politics in 2018.

Trump's speech was all over the place, to say the least. From vowing to get his border wall at the U.S.-Mexico border built to congratulating himself multiple times, a lot happened. But arguably the most memorable moment from the event was when Trump paid homage to the sea of Democratic congresswomen in attendance. The moment happened shortly after a few congresswomen clapped when he mentioned that women filled "58 percent of the new jobs created in the last year," according to NBC News.

Trump then told the visibly happy politicians that they'd "like" the next part of his speech. "All Americans can be proud that we have more women in the workforce than ever before — and exactly one century after Congress passed the Constitutional amendment giving women the right to vote, we also have more women serving in Congress than ever before," he added, according to Vox.

In response to this line, all of the congresswomen wearing white stood up and cheered. It was a powerful moment highlighting the diverse and accomplished women who swam to the top in 2018, despite the tense political climate at the moment.

It was also refreshing to see women taking credit for their accomplishments, as they very well should do.

"A powerful moment for women during this state of the union address!!!" one person gushed about the scene.

"My favorite part of the state of the union address was when trump brought up working women and all of the democratic women stood up and started cheering for themselves," another person added.

But if you think people applauded Trump for giving the women a shoutout, that wasn't the case. Many commenters found it comical that Trump, who has belittled and made offensive remarks against women countless times before, would ever get credit for women's success.

"Trump taking credit for there being more women in Congress is like the Fyre Fest guy saying 'You're welcome for the documentaries!!'" someone tweeted.

"The women are chanting USA. Mike Pence looks lost," one person joked. "Trump doesn’t realize he is being mocked. It is a wonderful moment."

Someone else chimed in: "All of the new Congresswomen standing up to take a bow when Trump tried to take credit for women getting new jobs is the greatest thing that’s ever happened in the history of the #SOTU."

"Love Dem ladies pumping the air to make it quite clear that women working has NOTHING to do with Trump, and something women did for ourselves, despite p***y-grabbing misogynist pigs like him," one person added.

Yep, it's clear people aren't here for Trump trying to take credit for women's political success. And it's even more obvious that Democratic congresswomen will continue to dominate the political landscape, no matter what challenges might come their way.