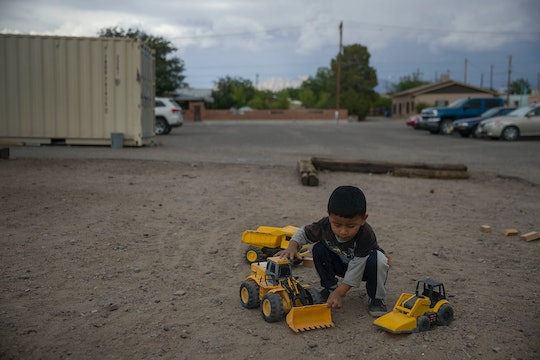 Due to an increased spike in referrals and a lack of funding, the Trump administration has cancelled English classes, legal aid, recreational activities, such as soccer, and other important programs and services for unaccompanied immigrant children in federally-contracted migrant shelters across the United States, The Washington Post first reported on Wednesday, June 5.

The decision to cut back on these programs, as a Health and Human Services (HHS) spokesperson told Romper, was due to an extreme financial strain on the department and its services. HHS told Romper that the agency is seeking an "emergency appropriation of $2.88 billion to increase shelter capacity in order to meet the needs of minors in our custody" while the Office of Refugee Resettlement (ORR) works to find sponsors for the children.

Until that sum of money can be met, the ORR will be cutting programs and activities that "are not directly necessary for protection of life and safety," HHS said in a statement. "Additional resources are urgently required to meet the humanitarian needs created by this influx — to both sustain critical child welfare and release operations and increase capacity."

As of April, more than 40,000 children have been referred to HHS this fiscal year, according to CNN, which puts it on track to be the largest number of unaccompanied immigrant children in the program's history.

During their time spent in shelters (which is an average of 48 days), children reportedly spend their days studying and participating in activities, like playing soccer to pass the time, according to The Washington Post. But now that some of these programs are being eliminated, it's unclear what they will do during their days.

Morale in these centers is already typically low, even with the programs, and their living conditions are less than ideal. According to CBS News, one shelter in Florida, for instance, is described as having harsh rules, leading to feelings of fear and anxiety in children, who have likely fled violence, poverty, or even war in their home countries.

Agency personnel are currently touring an army base in Georgia to potentially use for more space to house unaccompanied minors, according to CBS News. But the demand for these now-cut programs will still be high, even as more children continue to move into migrant shelters.

Last month, the Trump administration requested $4.5 billion to address an "immediate humanitarian crisis" at the southern border of the United States, according to Mother Jones. While nearly two-thirds of that money would go to sheltering children (and hopefully reinstating these programs), lawmakers were unable to reach an agreement on the amount, according to The Washington Post.

The Acting Department of Homeland Security Secretary Kevin McAleenan described to The Hill what is going to happen if they don't receive funding — and it's even worse than losing classes and programs in shelters. "If we don't get the supplemental funding, you're going to see children backing up at the border in facilities in conditions no American would be comfortable with in terms of how we care for children," McAleenan said. "Congress has to act on funding."

It's devastating to hear how helpless these children, shelters, and facilities are without the proper funding for programs. And it's up to lawmakers to help make a change and bring back a sense of hope to these children.