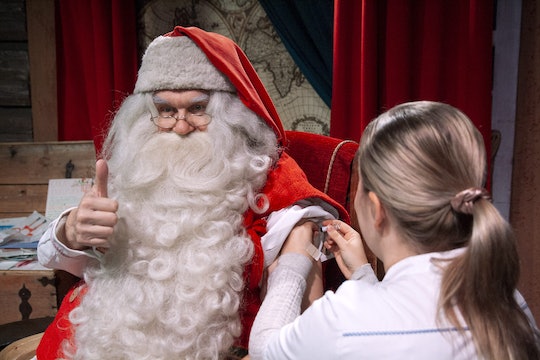 In an effort to promote COVID-19 vaccines, the Department of Health and Human Services (HHS) reportedly planned to partner with Santa Claus, or rather Santa performers, in a $250 million public awareness campaign, according to The Wall Street Journal. In exchange for promoting COVID-19 vaccines, Santa Claus performers would have received early access to the vaccine. But with just two months to go before Christmas, the Trump administration has shelved its Santa COVID-19 vaccine promotion plans.

According to The Wall Street Journal, using Santa performers to promote a COVID-19 vaccine had been the idea of HHS Assistant Secretary Michael Caputo. In late August, Caputo reached out via phone to Fraternal Order of Real Bearded Santas Chairman Ric Erwin to discuss the idea, noting that vaccines were expected to be approved by mid-November and rolled out to frontline workers ahead of the Thanksgiving holiday.

"If you and your colleagues are not essential workers, I don't know what is," The Wall Street Journal, which obtained an audio recording of the call from Erwin, reported Caputo said. "We're in partnerships with many organizations and we're getting in more everyday. If we got into a partnership with you and your colleagues we could do something where you go to your colleagues who are in the different cities where we're having events and have them come and when the vaccine is available, get vaccinated first."

Other holiday performers, such as those cast as elves or Mrs. Claus were also reported to be eligible for early access to a COVID-19 vaccine if they participated in the public awareness campaign, according to The Wall Street Journal. But now, none of them will get an early COVID-19 vaccine. An HHS spokesperson told the publication the plan has been scrapped and that HHS Secretary Alex Azar had no clue it had even been in the works.

In September, NPR reported Caputo would take a 60-day leave of absence following reports he'd falsely accused government scientists of engaging in "sedition" against President Donald Trump. At the time, according to CBS News, a statement from HHS described Caputo's leave of absence as an opportunity for him "to focus on his health and the well-being of his family," noting Caputo had discovered a lymphatic issue" the week before.

On Monday, it was unclear if HHS' decision to scrap the COVID-19 public awareness campaign was tied to Caputo's absence, the fact that a vaccine is unlikely to be available ahead of the holidays, or other criticisms the proposed campaign had revealed. According to Slate, some Democrats accused the Trump administration of using taxpayer money to fund a COVID-19 vaccine public awareness campaign weeks ahead of the election that read more like a political campaign. While the plan to use Santa performers to promote a COVID-19 vaccine has been scrapped, HHS is now reviewing the rest of the ad campaign, according to The Wall Street Journal.

Whatever the reason, the news comes as a disappointment to Erwin. "This was our greatest hope for Christmas 2020, and now it looks like it won't happen," Erwin told The Wall Street Journal, noting he plans to cancel all but one socially distanced Santa booking this holiday season.