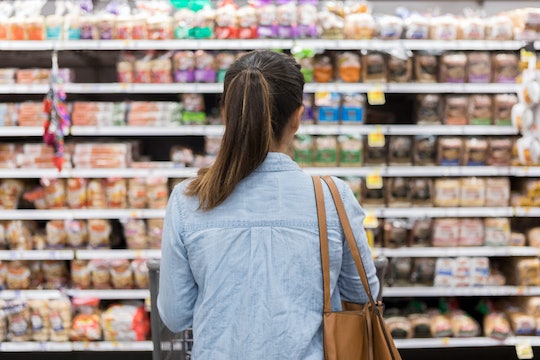 The Trump Administration announced Wednesday that it had finalized a new rule that could see some 700,000 Americans lose their food stamp benefits once it takes effect next year. Under the new rule, states would no longer have the authority to waive federal limits and work requirements imposed on able-bodied adults with no dependents receiving Supplemental Nutrition Assistance Program (SNAP) benefits. Although the Trump Administration's food stamps rule set to go into effect next year isn't likely to affect low-income families, two other proposed changes to SNAP benefits could.

Established via the Food Stamp Act of 1964, SNAP has since become the largest federal nutrition assistance program, providing eligible low-income individuals and families with the means to purchase eligible food items such as bread, milk, and eggs. Currently, able-bodied adults without dependents (known as ABAWDs by the Department of Agriculture) are limited by U.S. law to receiving just three months of SNAP benefits unless they are working or otherwise participating in a work program for a minimum of 80 hours a month, according to the USDA. States, however, have had the authority to shield ABAWDS from these limits and requirements if they lived in an area where unemployment was 20% above the national average, The Wall Street Journal reported.

But under the new rule set to go into effect in April 2020, states will only be able to waive federal limits and work requirements for ABAWDs if the unemployment rate in their area is 6% or higher. The Trump administration claimed Wednesday that the rule was geared at supporting the USDA's "commitment to promoting employment."

"Despite a booming economy and need for workers, nearly half of ABAWDs receiving SNAP now live in waived areas," an announcement of the finalized rule from the USDA read. "According to recent job numbers, the unemployment rate is at 3.6% and there are 7 million job openings. Now is the time for more Americans to enter, re-enter, and remain in the workforce."

It's a similar message USDA Secretary Sonny Perdue shared in an op-ed published last year in USA Today when the SNAP benefit reform was first proposed. At that time, Perdue argued that the rule would ultimately "reward more Americans with the virtue of work" and "save hardworking taxpayers $15 billion over 10 years."

Those savings, however, will come at a potentially steep price for the more than 700,000 people the USDA has estimated will lose their food stamp benefits as a result of the new rule. In fact, a 2018 Brookings Institution study found that restricting waivers for work requirements would likely hurt ABAWDs who are already working, albeit in jobs where the hours are sporadic or not guaranteed.

While the Trump administration's rule to curb state-issued waivers to federal work requirements may not impact families, two other recently proposed changes to SNAP benefits access certainly could. The first proposed rule seeks to change how utility costs are factored into household eligibility, while the second would restrict states from automatically enrolling those who qualified for other forms of federal aid in SNAP.

A spokesperson for the USDA tells Romper the other two rules are expected to go into effect "mid-year 2020," though specific timing has not been confirmed. Meanwhile, the Federal Unified Agenda of Regulatory and Deregulatory Actions lists the "final action" for both rules as May 2020.

A recently-released study by the Urban Institute found all three of the USDA's proposed rules would result in 3.7 million people losing their SNAP benefits, 982,000 students losing access to free or reduced cost school lunches, and 2.2 million households seeing their average monthly benefits get cut by $127 had they been implemented in 2018.

Unfortunately, the Trump administration's efforts to restrict access to SNAP benefits come at a time when millions of Americans are experiencing food insecurity, or a disruption of food consumption due to a lack of financial resources. Data released by the USDA in September, for example, found that 37.2 million people lived in households that were food insecure in 2018.

In fact, for a variety of reasons including insufficient benefit rewards, many SNAP recipients remain food insecure despite receiving benefits. In a statement to NBC News, University of Illinois at Urbana-Champaign professor Craig Gundersen, who has a 20-year history of studying SNAP, said half of the 3.7 million people estimated to be at risk of losing their SNAP benefits due to the proposed rules are likely already food insecure. "The essential goal of the program is to mitigate hunger and its consequences in the United States," Gundersen told NBC News. "Anything that impedes SNAP of doing that is very problematic as it leads to food insecurity in our country."