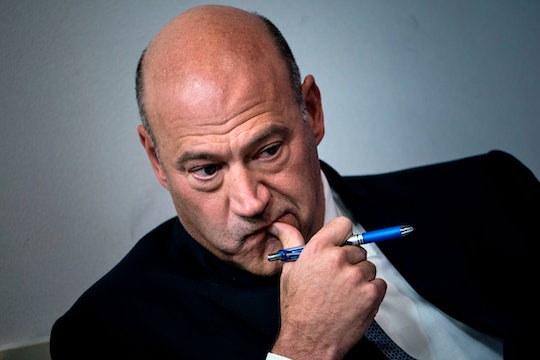 On Wednesday, the Trump administration released its long-awaited tax reform framework, and although it seemed to largely benefit the wealthy, the White House has insisted that it was designed with the average American in mind. But in a press briefing Thursday, a Trump advisor said Americans can buy a new car with $1,000, and the only thing it seems to suggest is that the people behind the tax plan don't really seem to know what life is actually like for most people in this country.

Trump's chief economic advisor — and former Goldman Sachs president — Gary Cohn made the confusing comment after he was asked by reporters how he thought the new tax plan would benefit middle-class Americans, according to People. Cohn noted that, under Trump's plan, “a typical family earning $100,000 with two children … can expect a tax cut of about $1,000," which, really, is already pretty baffling (since when does a "typical family" earn six figures?). But his suggestions as to the impact a $1,000 tax cut would actually have were even less realistic. Cohn said,

If we allow a family to keep another thousand dollars of their income, what does that mean? They can renovate their kitchen. They can buy a new car. They can take a family vacation. They can increase their lifestyle.

Unsurprisingly, it didn't take very long before Twitter began roasting Cohn for his statement. Many noted the painfully obvious fact that he seemed to have no idea what things like renovations, cars, and vacations actually cost:

Others took issue with the fact that he used the example of a couple earning $100,000 with two kids as his benchmark for what families might be able to expect. But according to CNBC, the average American family actually makes about $74,000 a year before taxes — while the median family income in the United States is only about $55,000.

What's perhaps more concerning though, is the fact that Cohn continued to suggest that the wealthy would be less able to shirk their tax-paying responsibility through the new plan, when the opposite actually appears to be true. He told reporters, according to People:

Our plan is based on lowering rates, and expanding the base. It's very simple if you think of what we're doing. You expand the base by getting rid of the loopholes, the loopholes that the wealthy taxpayers have used to pay tax on less of their income. So we have designed the plan where you're going to pay a lower rate, but you're going to pay it on more of your income. That is a basic, core premise of our plan.

Yet, the plan will also eliminate the Alternative Minimum Tax (AMT) and the estate tax, according to ABC News, both of which are taxes paid primarily by the very wealthy, meaning they will likely pay less, not more (particularly given that the tax rate in the top income bracket will also be reduced). What's more is that short of removing loopholes, the Trump plan technically expands one: as Brookings Institute senior fellow Henry Aaron explained to ABC News, given the lower tax rate for small businesses, it's entirely possible that wealthy Americans will change their tax status from individuals to being taxed as "S corporations," to take advantage of the savings.

In other words, it's likely that under the proposed tax plan, the wealthy will still continue to benefit, even if the president himself has said otherwise. What's less clear though is how it will actually affect the average American, and middle-class families who don't fit into the $100k-a-year-with-two-kids example.

Although Cohn's comments were seemingly supposed to clarify those concerns, all it really seemed to do was reinforce the idea that the Trump administration may not be able to deliver on its promise to provide a tax plan that will help most taxpayers. And while the tweets stemming from his press briefing were definitely funny, the truth is that his comments were also really frustrating. One thing that does seem pretty clear though? Most Americans probably won't be buying a new car with their tax savings anytime soon.